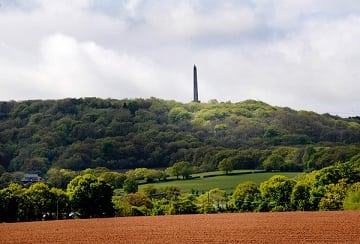 The National Trust says that it is hugely disappointed to learn that their application for backing from the Heritage Lottery Fund to help save Wellington Monument has not been accepted for the second time.

A crucial step towards a grant that would see the important local landmark repaired, it would have given money for detailed plans to repair the monument and allowed submission of a final bid to unlock significant funding for the repair project.

The Trust says, while disappointed, it will be looking at other options for the future of the monument and plans to mark the bicentenary of the laying of the foundation stone on 21 Oct, will be going ahead.

Helen Sharp, Project Manager, says: ‘This is a difficult decision to receive and clearly a big setback for the project. We will, as we did before, want to talk to and work with the Heritage Lottery Fund to understand if there is an option to reapply.

‘A very large number of people have taken part in helping us to get this far and we would like to thank them all for the support. We have brought the project to save the monument this far through our joint work and we want to build on those strong relationships and to continue to work together.

‘The National Trust is an independent charity that looks after many special places. We have £1bn of conservation works to tackle in the next ten years and money to support projects such as Wellington is extremely limited so we need to look elsewhere for support.

‘We were seeking a grant from the HLF that would have funded half of the £4m project. Because the HLF is the biggest funder of heritage projects in the country and one of only a couple of funders able to support projects at this level, filling the gap from elsewhere could be extremely challenging but we are looking at all options.’

The National Trust is planning an evening of celebrations on Saturday 21 Oct to mark 200 years since the laying of the foundation stone. The event, involving a performance by a group of local actors, will also see the monument illuminated.

During the day, there will also be a walk from the town to the monument, with the evening’s events supported by the Blackdown Hill’s AONB Sustainable Development Fund. More information on the event is available on www.nationaltrust.org.uk/wellington-monument.

The monument is not only Wellington’s own memorial to the Duke of Wellington and his victory at the Battle of Waterloo but is also a landmark for many, including travellers on the M5.

At 175 feet, it is the tallest three-sided obelisk in the world. It was funded through public subscription with the foundation stone being laid in 1817 and was finally finished in 1853 after more than three decades of building work.