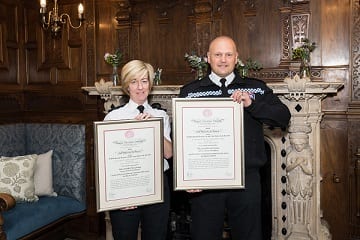 This week, the police team which helped save the life of a 14 year old from stab wounds and woman who intervened in a robbery are among the officers, staff and members of the public across Somerset being honoured by Avon and Somerset Constabulary’s Chief Constable.

Extraordinary accounts of bravery, courage and commitment were celebrated this week (Tuesday 10th October) at a special awards ceremony at Clevedon Hall, Clevedon. Police officers and staff from Somerset were given accolades at the event, which was attended by Chief Constable Andy Marsh, Avon and Somerset Police and Crime Commissioner Sue Mountstevens, the High Sheriff of Somerset, Mr Richard Hickmet.

Chief Constable Andy Marsh said: “The remarkable nominees at the Somerset Force Awards remind us all of what it means to be in policing and part of a group who want to make a difference. The awards reflect the very best of traditional policing; selfless acts of bravery and courage, as well as tenacity in tackling the changing face of policing with evolving new issues and compassionately caring for victims of crime.”

Police and Crime Commissioner Sue Mountstevens said: “I consider it one of the many privileges of my role as PCC to attend award ceremonies such as this.  It’s important that officers and staff who complete their work with integrity, duty and selflessness are recognised.  It’s also always heart-warming to hear of local people who have been nominated for gallantly stepping forward to support law and order in their communities and support those most in need.  All of the nominees and their families should feel very proud.”

The award winners are as follows:

This award is for members of the public who perform meritorious service in support of law and order in the force area.

Mr Stuart Kendellen, Wells Somerset – Stuart Kendellen selflessly intervened in a dispute involving a knife attack. A female victim had been attacked with a knife and as Stuart was passing in his vehicle he saw the victim lay in the road. Upon approaching the scene, the suspect began to attack the victim again but Stuart intervened, pushing the suspect and restraining him to prevent further injuring to the victim. He then physically restrained him until Police arrived.

Mr Kendellen says, “I didn’t realise the potential danger of the situation, it’s not an everyday thing you come across in Wells. I was shocked when I realised what had happened, but knew I had to act to protect the injured woman. I was pretty shaken afterwards, but it didn’t really sink in until the next day.”

Ms Melissa Bell, Lydeard St Lawrence, nr Taunton – Ms Bell intervened in a dispute between two members of the public involving a shotgun and threats to kill. She bravely put herself between the two parties in an attempt to defuse the situation, putting herself at risk of serious injury due to the presence of a shotgun.

Ms Seanna Moore – Seanna Moore acted to try to prevent an aggravated burglary which took place in Congresbury Village Store, her quick thinking and bravery assisted Police in detaining two offenders. Seanna was working at the store when she found a man had gained access behind the counter. In an act of bravery Seanna grabbed the armed male from behind the counter and attempted to pull him away. He fled the store shortly after with stolen goods but undeterred, Seanna gave chase and gathered vital information about their vehicle. This resulted in the car being stopped minutes later by Police Officers and both males were charged and the stolen items recovered.

Ms Moore says; “It took me a second to grasp what was going on in the shop, but as soon as I realised I immediately felt angry. I was concerned for the safety of my colleague – instinct took over and I just tried to get them out. The Awards are a great opportunity to hear about the courageous stories within the area.”

The Awards of the Royal Humane Society (RHS) are made to those who, at personal risk, save or endeavour to save life.

PC Dave Garbett, Yeovil – PC Garbett and fellow officer (awarded but not named) were sent to an address in Yeovil to attend an assault. When they arrived, they found a 14 year old boy drifting out of consciousness due to loss blood from multiple stab wounds. After calling an ambulance, the officers had to act quickly to stem the bleeding and keeping the male calm. When the first paramedic arrived, PC Garbett and his colleague were able to identify the injuries and vitally tell staff that a knife blade might still be in his chest. Medical staff were unanimous in stating that the actions taken by both PC Garbett and his peer undoubtedly saved the males life.

PC Matt Boiles, PC Alice Durston, PC Samuel Hodson, Sgt Mark Jenkinson, Weston super Mare – The quick-thinking team of officers saved a stab wound victim using belts and clothes to stem bleeding from the wounds. On arrival at the scene the victim was in severe pain and bleeding profusely, it was quickly realised that the male’s life was in danger. The team of officers grabbed a first aid kit from their vehicle and used a high visibility tabard and belt to use to stem the bleeding from multiple stab wounds, preventing the male from bleeding to death. The attending ambulance crew agreed that the actions taken by each one of the officers had saved the male’s life.

Mr Paul Gallagher, Watchet (between Taunton and Bridgewater) – First aider, Mr Gallagher went out of his way to save the life of a biker who stopped breathing after a road traffic incident just outside of Horner. Paul Gallagher provided care until paramedics arrived and continued to assist with chest compressions until the biker begin breathing again.

PC Tony Freeman, Bridgwater, PC Maria Jennings, Taunton – The two officers entered a dangerous situation involving a young male who had been demonstrating potentially threatening behaviour with a large gas cylinder and firearms. During the episode, the man became unconscious and officers risked their own lives by walking towards unknown danger. In doing so they were able to resuscitate him and save others in the surrounding area from potential threat.

Awarded at the discretion of the trial judge in recognition of an exceptional contribution to the events or evidence played out at a particular trial.

DC Mark Allder, Cheddar – Awarded for his work on a case involving systematic theft and defrauding of numerous individuals, who had donated money to more than 60 charities in memory of recently deceased loved ones. Cheddar based, George Williams Funeral Directors were involved in the case which dated back to 2010 and involved 46 funerals. Mark’s involvement included very time-consuming detailed work, which led to successful and compensation paid to the charities that otherwise would have lost the valuable donations.

Ms Laura Woods Financial Investigator, DC Haley Mathews, DC Clare Nelson, Bristol – DC Nelson, DC Mathews and Woods were part of a team working on a complex and long running investigation in to the supply of Class A drugs. As a result of their diligence and professionalism, the defendants were given more than 30 years jail time. The sentences speak volumes about the hard work and fine presentation achieved by each individual role.

For significant personal courage or significant initiative and/or commitment in the execution of duty far and beyond what should normally be expected.