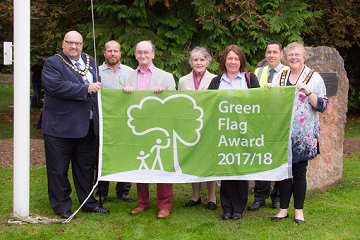 Green Flags have been raised in five parks and open spaces in Taunton Deane.

The prestigious Green Flags are the mark of a quality park or green space that boasts the highest possible environmental standards, is beautifully maintained and has excellent visitor facilities.

They were awarded during Love Parks Week in July to a record-breaking 1,797 parks and green spaces across the UK.

The flags were raised by the Mayor of Taunton Deane, Cllr Hazel Prior-Sankey, and her consort Adrian Prior-Sankey, with members of the Open Spaces team and volunteers from the Friends groups which help to keep them in tip top condition.

Cllr Catherine Herbert, Executive member for sport, parks and leisure, said: “We were thrilled to receive these Awards this year which in fact we have retained from last year. It just goes to show how hard our staff and volunteers work to maintain our parks and open spaces to such a high standard, and how it really is a long-term commitment. It is an honour to fly these flags in recognition of their dedication.”

International Green Flag Award scheme manager Paul Todd said: “Each flag is a celebration of the thousands of staff and volunteers who work tirelessly to maintain the high standards demanded by the Green Flag Award.”