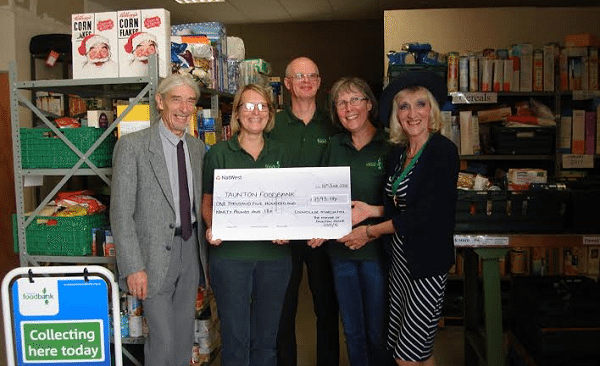 Proceeds from fundraising efforts by the former Mayor of Taunton Deane, Cllr Marcia Hill, have been presented to her nominated charities the Taunton Foodbank and the Neonatal Intensive Care Unit at Musgrove Park Hospital.

Cllr Hill raised £3,186.22 during the year which included donations and collections at her Patronage Concert and Masquerade Ball. The money was split equally between the two charities although the Neonatal Unit received an extra boost of specific donations.

Both charities also received goods donated by the public throughout the Mayoral year following appeals by Cllr Hill.

Dozens of Easter Eggs were donated to the Taunton Foodbank along with hundreds of items deposited in collection points across the Deane; and scores of tiny hats and garments were knitted for the Neonatal Unit.

Cllr Hill said: “It was wonderful being able to present these cheques which will make a real difference to the services both charities provide. I choose these good causes especially because people of any age and means could donate to them. People do like to give but they can’t always give money so being able to donate an item of food or a ball of wool means that everyone can make a contribution no matter how small. I am grateful to everyone who supported them.”

The Taunton Foodbank, whose premises are in Belvedere Trading Estate, Albemarle Road, provides food and essential supplies to eligible families and individuals with children. It has collection points in the major supermarkets, and at offices, schools and churches across Taunton. They welcome donations of non-perishable, in-date food and are in particular need of long life fruit juice and milk.

The Somerset Neonatal Unit at Musgrove Park is a specialised ward for the treatment of premature and sick newborn babies. The money donated to the unit will help to buy specialist equipment including photo-therapy units and cosy cots.

The Neonatal Unit now has a stock of Foodbank vouchers which can be issued to eligible parents. Cllr Hill added: “It’s wonderful that my two charities are now working together to make life easier for people in times of need.” 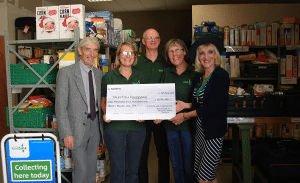