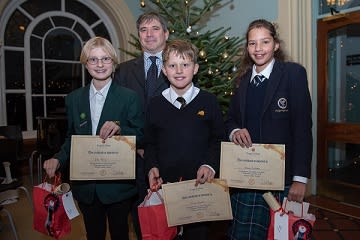 King’s College in Taunton has recently announced the winners of its Headmaster’s Essay Prize – A Cabinet of Curiosities.

Entrants were invited to choose three to five objects to place on display in a museum cabinet. They were asked to describe each object and explain what story it told, why it was of particular interest, and why it was important for other people to learn about it.

Last week the school reception area was turned into a festive tea room ready for guests to enjoy high tea, accompanied by a Third Form music scholar on the piano, and listen to extracts from the prize-winning essays.

Ella Penny, from The Castle School, scooped first prize with her compelling essay focusing on her family’s history during and after the Second World War. Her essay dealt with the deportation of her grandfather and great grandfather from Latvia to Siberia, and included a number of very moving anecdotes.

Ella’s chosen objects were the Molotov-Ribbentrop Pact (known to many as the Hitler-Stalin Pact); a birthday note written on Siberian birch tree and sent to her grandmother on her tenth birthday, and a published collection of memories of the unfortunate victims of the Soviet-era deportations.

The judges, Headmaster Richard Biggs, Head of History, Jamie Bough and Head of English and Academic Scholars’ Tutor, Toby Smith, all agreed unanimously that Ella’s essay was a worthy winner of the inaugural competition.

The two runner up prizes went to Eliza Ellis and Alice Welch from Hanford School in Dorset. Both pupils were unable to attend the event, but extracts from their essays were carefully read to guests by two King’s College academic scholars.

The standard of the entries was so high that the judges also awarded three Highly Commended prizes. These went to: Max Trowell from Heathfield Community School, Emma Duckham from King’s Hall School and Lucy Hancock from Hanford School.