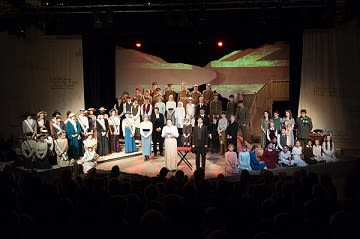 Students and staff at Queen’s College have staged the most ambitious production in the school’s history.

The Community Play, ‘For Queen’s and Country’, was watched by more than 2,000 people over five performances in the Queen’s Hall.

Written by Steve Eaton Evans, Director of Drama at the school, it marked both the 175th anniversary of the founding of Queen’s and 100 years since the end of World War One.

The play, which took Steve on a 14-year journey, told the story of the Hosegood brothers during World War One.

One of the brothers, Gilbert, was Head Boy at Queen’s while the other two went to sister school The Leys in Cambridge – all three lost their lives on The Somme.

Steve extensively researched their story – including the aftermath of the war for the Hosegood family – and used letters from the Front and other memorabilia obtained from relatives.

The result was a highly-acclaimed, moving and emotive production, which involved students and staff from across the school.

Children from local primary schools saw two free performances of ‘For Queen’s and Country’ and then there were three public performances with guests including the MP for Taunton, Rebecca Pow, the Mayor of Taunton Deane, Cllr Catherine Herbert, and many members of the Hosegood family.

Reviewer Steve Foster said ‘For Queen’s and Country’ would “merit a run at the National Theatre.”

He added: “The genius of this production is to illuminate the wider tragedy by a personal and intimate betrayal of the death of the three Hosegood brothers.”

However, Steve’s project was much more than a play – many lessons at Queen’s have had a World War One theme – in subjects including art, food and nutrition and English – and an exhibition of the work produced ran alongside the show.

There was also a special rugby match, which saw Queen’s take on The Leys for the inaugural Hosegood Trophy, presented by Mr Paul Kirton (nephew of the Hosegood brothers).