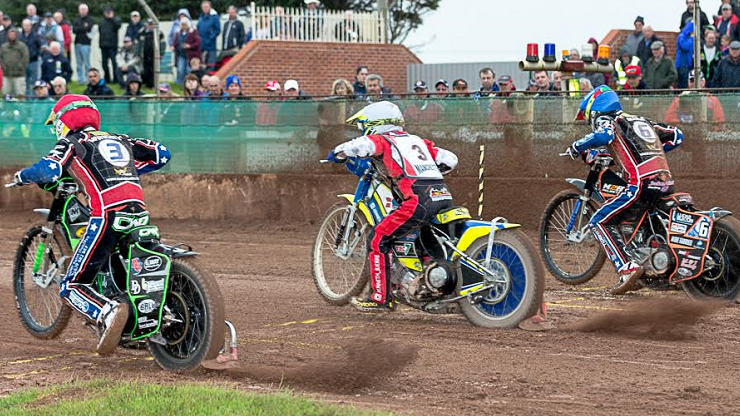 In far from ideal conditions, the ‘Cases’ Somerset Rebels overcame a resilient Belle Vue side make it a double over the Mancunian side, the Rebels having previous won at Belle Vue’s National Speedway Stadium at the beginning of May.

With rain and heavy drizzle making life difficult for the riders, Somerset got off to the worse possible start when the visitors opened things up with a maximum 5-1 race advantage in heat 1, but the Rebels quickly turned things around to the extent that they had established a 4-point lead of their own by the end of the initial third of the match, the highlight of those first five heats being Jake Allen’s superb heat 4 win over Craig Cook.

With the next three heats all seeing a share of the spoils, it ensure the Rebels remained 4 points to the good by the halfway stage, but heat 9 was to see them double that advantage when Richard Lawson and Charles Wright combined for a 5-1 race win.

But Belle Vue refused to yield and hit back just two heats later when Fricke and Worrall repeated their exploits of the opening heat to hit home their second maximum race advantage of the night, but it was ultimately to no avail as Richard Lawson and Jake Allen secured the win and a further three league points for the Rebels with a 5-1 race win in the penultimate heat.

“The rain and heavy drizzle made it a difficult night for all the riders,” said Somerset team manager Garry May, “and sometimes that can play into the hands of the visiting team, but the Somerset boys were not going to be denied, and I think they were more than good value for their win.”

“Having missed a couple of matches due to injury, Wrighty (Charles Wright) was determined to make up for lost time, and he was in superb form, as was Jake Allen, while Richard Lawson put in an excellent shift given that he was feeling decidedly ‘2nd hand’ after his big off the night before whilst riding for Glasgow, but overall, this was a good all-round team performance in far from ideal conditions, and credit is due to both sets of riders for they way they rode here tonight given those conditions.”