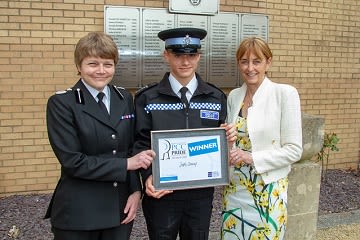 Volunteer Police Cadets, outstanding Special Constables and a 4-year-old who saved her mother’s life by calling 999 were amongst those recognised at a PCC Pride Awards ceremony hosted by Police and Crime Commissioner (PCC) Sue Mountstevens.

Taking place at Police and Fire Headquarters in Portishead, 13 worthy winners were presented with PCC Pride Awards, before recipients and their guests were invited to have lunch with the PCC and Deputy Chief Constable Sarah Crew. After lunch, the winners and their guests enjoyed a tour of the communications centre where ‘999’ and ‘101’ calls are received.

PCC Sue Mountstevens said: “Hosting the Pride Awards and hearing more about how local people go above and beyond is one of the best bits of my role. I am delighted that so many people have chosen to nominate these ‘silent stars’ who go about their daily business with little or no recognition.

“These awards highlight just some of the very special individuals we have living and working amongst us and their exemplary efforts are hugely appreciated across Avon and Somerset.  It’s important we take the time celebrate these inspirational and selfless individuals, who work hard to help keep our communities safe and feeling safe.”

During the afternoon lunch we had the chance to catch up with some of the winners and heard what they thought about the day:

Finn was nominated for his bravery and courage when he witnessed a burglary in progress earlier this year. Despite being threatened by the offender, Finn confronted and detained the burglar until the police arrived. Finn really did go above and beyond to help the police catch a prolific offender.

Head Cadet Josh Davies is nominated for his outstanding attitude to his role as a Taunton Cadet. He commits over 20 hours a month to actively work in his community and he really is a silent star of the police cadets. Josh said: “I’m really proud to receive such an award – thank you so much to my nominator and cadet leader Mark for this nomination. I am pleased that I am recognised as a cadet. I enjoy my role as head cadet and it has really improved my confidence.”

Linda Cunningham, former Chair of the Independent Residents Panel, has made a phenomenal difference. Her positive leadership has contributed to many innovative changes. Lina said:  “Thank you so much for this recognition. It was lovely to meet the other awards winners and hear their inspirational stories.”

Kaydi, a four-year old from Yeovil, was extremely brave when she called 999 earlier this year when her mummy, Kara, would not wake up. Thankfully, working with the call handler, emergency services were on the scene within 10 minutes. Kara, Kaydi’s mother, said: “I just want to say a huge thank you to the police for the way that Kaydi’s call was handled. This ceremony was a fantastic way for Kaydi to understand how 999 works and to meet Evie who took her call. It’s a great memory that she will be able to look back on this in the future.”

Avon and Somerset Police Call Handler Evangeline Toker-Lester, answered the 999 call to four-year old Kaydi. Recognising the young voice on the line, she adapted her style to ensure a positive outcome. Evangeline said: “It’s an absolute privilege to be able to meet Kaydi today. She was so wonderful and brave when I took her call that day. I wouldn’t have been able to accomplish the award without her and the hard work of the fantastic team in the call centre.”

Taunton PCSO Georgia Coles worked hard to deliver an enlightening talk at the National Child Centred Policing Conference earlier this year. She has recently been named as Children and Young Persons Champion where she hopes to improve engagement for our younger communities. Georgia said: “It means a lot to be recognised for the work that I do.”

Special Constable Chris Rees is nominated for his eight years of hard work with the Wellington Neighbourhood Team. He is a very proactive officer and a member of the team who is rightly held in high regard by all officers who work with him. Chris said: “As a special, it’s nice to be recognised as part of the Wellington team.”

The final winners were PC Victoria, and PCSO’s Gary, Zoe & Michael of Frome Neighbourhood Team. They were praised for their support for a fellow colleague during a period of poor mental health over the last year, and their help and support is replicated in their work with local people. They said: “These awards are special as our nomination came from our colleague. Today is a really special day, especially as it shows the bravery of our colleague.”

If you would like to nominate someone for a PCC Pride Awards visit www.avonandsomerset-pcc.gov.uk/Take-Part/PCCs-Pride-Awards.aspx

People are encouraged to put names forward as nominations for the PCC’s Pride Awards.  The Awards are open all year round and decisions will be made quarterly.