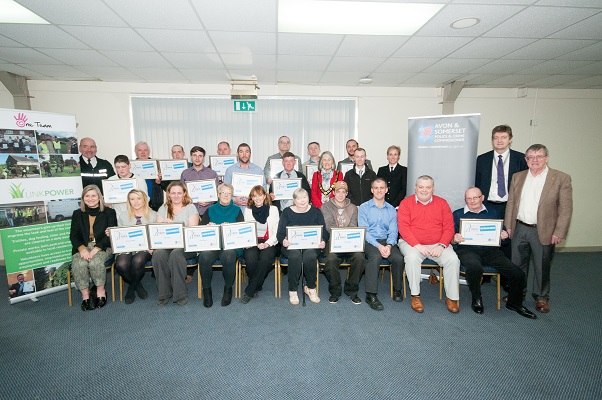 Volunteers, who make up the Link Power Project in Taunton, have been awarded PCC Pride Awards for their contributions by Avon and Somerset Police and Crime Commissioner (PCC) Sue Mountstevens.

The ceremony, which took place at Taunton Rugby Club, saw 18 volunteers awarded for their combined dedication of 9,500 hours, addressing local community issues such as returning trollies to local supermarkets, dealing with fly-tipped rubbish and litter picking.

PCC Sue Mountstevens: “I was delighted to find out more about the Link Power Project and the work that’s taking place to improve the Halcon Ward.  To hear about how the voluntary gardening, litter picking, clearing of fly-tipping and other community based projects are improving the lives of the local Taunton residents is incredible.

“I was also astonished to read that collectively the volunteers have given 9,500 hours of time as part of this project over the course of the last year.  And, I’ve no doubt the 61 tonnes of rubbish removed from the Halcon Ward and the 1,000 shopping trolleys returned to ASDA and Sainsbury’s has made a real difference to the whole community.”

During the ceremony, award winners were invited to the front and were presented a certificate by the PCC, while a citation was read out about each individual’s accolades.

Sergeant Andy Murphy QPM, who nominated the volunteers said: “Link Power is just one of the projects the One Team has initiated, that gets the local community to take responsibility for themselves and its success is a real credit to all of them.  The project also gives people from communities like Halcon another chance, which is really important.

“The volunteering, focus on increased qualifications and increased confidence is having a really positive impact not only on the community but also those involved in the project, addressing mental health problems, drugs and alcohol crime. All of the volunteers are quite humble people but I can see they’re beaming with pride to be recognised for their efforts.”

Speaking after the ceremony, Cllr Jane Warmington said: “For the volunteers to be recognised by someone like the Police and Crime Commissioner, who covers the whole of the Avon and Somerset force area is a really big accolade.  I’m sure they are all absolutely delighted and it’s particularly nice that they’ve been recognised individually because that’s very important, they’re part of the team but actually it is their individual contributions.  I’m so proud of the volunteers they do so much good work, it’s just wonderful.”

To find out more about the PCC Pride Awards and how to nominate a silent star within your community visit www.avonandsomerset-pcc.gov.uk

To find out more about the Link Power Project visit www.linkpartnership.org