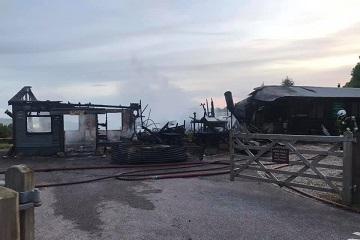 Images have been released by Taunton Fire Station showing what little is left after a severe blaze at the popular Pines Cafe, Buncombe Hill, Nr Taunton.

The blaze happened yesterday, August 21st and was reported just after 4am after the control Room received two reports from passers-by regarding an established fire.

A Fire Service spokesperson commented; “Three appliances from Taunton, Bridgwater and Nether Stowey were mobilised along with an aerial ladder platform and a water bowser from Bridgwater. Upon arrival the crews confirmed a commercial premises well alight and requested the attendance of 2 further crews, who also came out from Taunton and Bridgwater.”

“The property was 75% damaged by fire before the crews were able to get the incident under control using main jets, breathing apparatus and thermal imaging cameras.”

Stay up to date with more Taunton News, Taunton Events