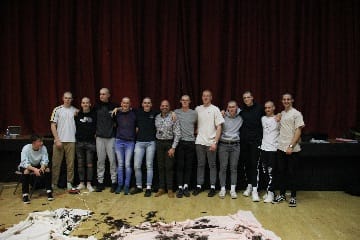 Players from the Men’s Rugby team at Richard Huish College joined together last week to shave their heads in aid of charity.

11 of the Huish team, also known as the Green Army, and a large audience of Huish students, gathered in the Main Hall on Friday 22nd March to have their heads shaved. They managed to raise over £1400 for the Movember Foundation, a charity close to their coach; Chris Heal’s heart.

Setting up a donation page two weeks prior, the students set a target of £500, something they quickly surpassed, with the total continuing to grow. This money will all go to the Movember Foundation, a charity that aims to ‘change the face of men’s health’ addressing issues such as prostate cancer, testicular cancer and mental health and suicide prevention.

One of the participants; Oliver Ryan, explained why they wanted to do this; ‘Men may fail to recognise or act on warning signs and may be unwilling or unable to seek help. This is why the Rugby Team decided to raise money for men’s mental health, in honour of our coach who has struggled with depression in the past. We joined him in being bald to show our support and help raise awareness for mental health issues amongst men.’

Talking about the event, the Men’s Rugby Coach, Chris Heal commented; ‘I’m so honoured that the young men of the Green Army are raising awareness for men’s mental health. Mental health is not like having a bruise or a scar that we can all see and that’s easy to fix, it’s invisible. It lies deep in your thoughts and these lead to times of insecurity and self-doubt. Working with these young men just inspires me to be the best I can be. Promoting this awareness hopefully will allow more men to share their feelings and not suffer alone.’