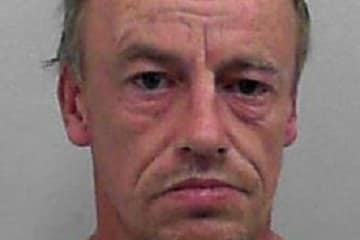 A 46-year-old homeless man has been banned from parts of Taunton after being issued with a Criminal Behaviour Order.

Complaints had been received about George Whyte’s behaviour in the town centre, which is affecting the quality of life of others.

He is a regular visitor to the town centre but people had complained about his drug use, street begging, drinking and general anti-social behaviour. His behaviour was first noticed in 2014 when he was arrested on suspicion of shoplifting.

He has had short stays in accommodation for the homeles but has regularly been evicted for breaching house rules with his drinking or drug misuse.

He has also been abusive to staff and other residents and has repeatedly refused offers of help preferring a vagrant lifestyle and sleeping in a council-owned car park.

Under the terms of the CBO he is not allowed to enter Victoria Park; banned from entering an area of Taunton town centre (detailed by the map) between 8.30am-6pm; and not to have possession of aerosols or open containers of alcohol in Taunton town centre.

The order, which was granted on 24 September, will remain in force until it is revoked.

Failure to comply will result in a criminal offence being committed which could result in a custodial sentence.

Anti Social Behaviour Co-ordinator Cerwyn Pritchard said: “George Whyte has been a persistent beggar in Taunton Town Centre area despite being warned several times by officers. He was often responsible for alcohol or drug related anti-social behaviour. His street drinking and drug use had resulted in unreasonable behaviour which affected the quality of life of others, resulting in repeated complaints.

“The granting of the CBO is great news for businesses and people wishing to enjoy the town centre.

“And it shows that we are listening to local businesses and members of the public with regard to the begging and street drinking and are doing something about it,” said Cerwyn.