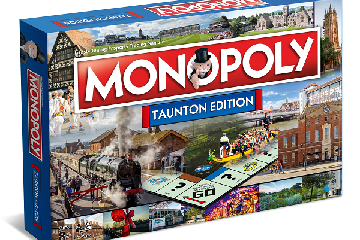 Gray’s Almshouses is heading for OLD Kent Road on the new Taunton MONOPOLY board and is quite the fit because it is very “old” and an integral part of the town.

Taunton was awarded in April the prestigious honour of its own official board after it emerged victorious in competition with other county locations.

Since the announcement that the town if getting a game, the public has been nominating their favourite local landmarks to replace the 22 that appear from the famous London classic original MONOPOLY board.

Gray’s Almshouses will now land on the “high cachet” Old Kent Road for 2 reasons, say the makers of this game WINNING MOVES UK, under official license from Hasbro. One it is old – just like Old Kent Road. It is high profile – like the MONOPOLY game’s most modestly ranked location.

“Gray’s Almshouses just HAD to go on one of our high cachet spaces,” says WINNING MOVES UK CUSTOM GAMES EXECUTIVE Jake Houghton. Mr Houghton said that alongside Mayfair, Old Kent Road is the space everyone talks about.

The board will feature more than 30 town landmarks on MONOPOLY spaces. As well as the customised spaces, the Community Chest and Chance cards will be Taunton themed.

The MONOPOLY game for Taunton will be launched in VIP style on 19th October with a RED carpet being rolled out at The Cooper Associates Somerset County Cricket Club which is when it’s available in the shops.

Somerset County Cricket Club will land on a “leading” space on the new game.

The official launch will be at the prestigious and plush 1875 Club, which is situated in the Somerset Pavilion.