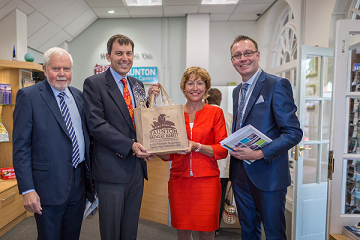 TOURISM and heritage Minister John Glen MP enjoyed a whistle-stop tour of Taunton on Monday – and said he was impressed with the county town and its plans for the future.

He was invited by Taunton MP Rebecca Pow and during his trip, accompanied by Leader of Taunton Deane Borough Council John Williams, visited historic Bath Place, home to many niche, independent shops, the Museum of Somerset, Castle Green, Goodland Gardens and the Brewhouse Theatre.

He took home a truly local souvenir – a selection of local products donated by Taunton’s award-winning Farmers’ Market, presented to him at Taunton Visitor Centre by manager Andrew Hopkins.

The visit, which also included a tour of Hestercombe and a meeting with Arts Taunton, was warmly welcomed by Cllr Williams who said it offered a chance to show the Minister at first-hand what Taunton, the South West’s first Garden Town has to offer.

He spoke to the Minister about Taunton’s regeneration, demonstrating what has been achieved and what is still to come.

“It was great to receive the Minister in Taunton and he was obviously well briefed, showing real interest in what we have been doing for the past decade and the plans to come.

“He fully supported the need to plan and invest for the future and commended Taunton Deane on its proactive stance. He was particularly impressed by our Visitor Centre, its business focus and its role in serving the wider community in its relatively new location.”

At The Brewhouse Theatre, the Minister learned of the ambitious plans for the arts centre and the Coal Orchard regeneration. “He was most helpful in identifying potential funding sources which he recognised would be needed. He did urge us to keep in touch and to watch for announcements
as they come.”

In his tour of the town centre, Mr Glen was briefed on the public realm enhancement and parking improvements, including pay on exit.

“It was a very positive meeting and, with the help of our local MP Rebecca Pow, we will ensure that we keep in touch,” added Cllr Williams.