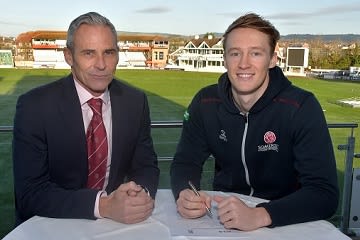 Somerset batsman George Bartlett has signed a contract extension which will see him remain with the Club until at least the end of the 2021 season.

The 20-year-old graduated from the Somerset Academy in 2016 and signed his first professional contract with the Club ahead of the 2017 season.

George made his Somerset debut in the Specsavers County Championship match at Warwickshire in 2017. Since then he has featured in a total of ten First Class matches scoring over 400 runs.

The highlight of his Somerset career to date came last season when he made his maiden century for the County versus Lancashire at Emirates Old Trafford. His innings of 110 came against an extremely strong attack that included Jimmy Anderson and was the cornerstone of the Somerset first innings total of 429.

George also has an impressive record for England’s Young Lions. In 2017 he amassed 179 for the Under 19s against India. That total is the highest ever overseas score made by an England Under 19 batsman, eclipsing the previous record of 170 which was set by Nasser Hussain in 1987.

After signing his new deal George said: “I’m delighted. As a young cricketer you aspire to become a professional, and for the Club to show faith in me for another few years is brilliant. It’s now about taking it season by season and looking to improve every year.

“Playing for Somerset means a lot. When you grow up in the County and come through the Academy you can see what it means to everyone. You become part of that cricket family and you just want to do as well as you can for everyone involved with the team. It’s great to be a part of this Club.

“I feel like I’ve shown glimpses of what I can do in the First Team so hopefully I can build on that this year and try to become a regular in the starting line-up.”

Somerset Director of Cricket, Andy Hurry said: “It’s fantastic news that George has committed his immediate future to the Club. He demonstrated what he is capable of with his maiden First Class hundred last season.

“He has the potential to establish himself across all three formats over the next few seasons and become a key part of the future success of the Club”.