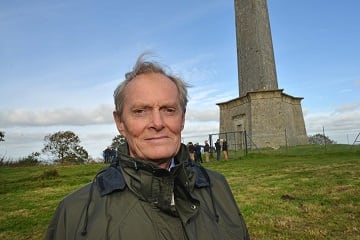 For the first time since it was built, the Wellington Monument has been visited by the Duke of Wellington to mark 200 years since the foundation stone was laid.

The current Duke climbed to the top inside the monument to see the view out across Somerset and switched on the lights which illuminated the monument over the weekend to celebrate the bicentenary. The monument was built to mark the success of his predecessor at the Battle of Waterloo in 1815.

The visit was the start of a weekend of celebrations which included performance telling the history of the monument.

The Duke was joined by dignitaries and champions from the local community, including descendants of some of the local people who have played their parts in the history of the monument.

These included William Sanford, whose great great great grandfather, William Sanford of Nynehead Court, led the initiative in 1817 to mark the Duke’s success in the Battle of Waterloo with a monument on his land. Also, Derek Johnson, whose family greeted many visitors for over 50 years in the late 19th and early 20th century as they were the keepers of the keys and lived at Monument Farm.

The Duke of Wellington said, ‘I visited the Wellington Monument for the first time in my life although I have in the past seen it from a distance. It stands on land which belonged to my family but now belongs to the National Trust. The monument was paid for by public subscription and has been a beacon and a symbol for two hundred years for the people of this part of Somerset. I do hope we can all find a way to restore this iconic structure.

The monument was originally erected to celebrate the first Duke’s victory at the Battle of Waterloo and was designed by architect Thomas Lee Jnr. After three decades, the Wellington Monument was completed in 1853 and at 175 feet is still the tallest three sided obelisk in the world. The National Trust took over the management of the monument in 1934 and has been working in recent years to secure funding to restore it to its former glory.

Helen Sharp, Project Manager for the National Trust, said, ‘So many people care about the monument and it has been good to bring them together to mark the bicentenary of the laying of the foundation stone.

‘To be joined by people whose families have had such a long standing relationship with the monument has brought the long history of the monument to life.

‘We are grateful to the Duke for taking time to visit and help us to celebrate this latest important moment in for the monument’s history.’

Local MP Rebecca Pow said, ‘I am so delighted to be joining the celebrations this weekend with many local people from school children to the Monument Champions.

The community has really taken this commemoration to heart which highlights how revered the monument is locally and also how iconic it is to the nation as a whole. Having met the Duke of Wellington to discuss the restoration project I am thrilled that he was able to come to Wellington to take part in the celebrations as well to rekindle his family links.’

Continuing the weekend celebrations, the local community were invited to celebrate with an evening performance that has been organised together with partners from the Blackdown Hills AONB and ActionTrack performance company telling the ‘Story of the Stone’. Because of bad weather from Storm Brian, the event venue was moved from the monument and held indoors at the St John’s Baptist church in Wellington.

For further information about the Wellington Monument please visit www.nationaltrust.org.uk/wellington-monument