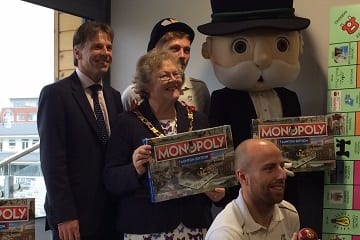 The traditional board spaces had been swapped for some rather iconic Taunton landmarks after voting took place earlier in the year by the general public.

It was revealed at the event that Somerset County Cricket Club had landed on the prestigious Mayfair.

Mr Monopoly made a special guest appearance along with VIP Jay Biddle, aged 13 who won his VIP status after a competition where he had to send in a paragraph on “why you love Taunton”. Jay’s answer was “he likes Taunton as it’s so diverse and you can be doing your shopping and within a few minutes you can be at in the greens of Vivary Park”.

Hazel Prior-Sankey, Taunton Deane Mayor was in attendance and commented; “I think it’s really exciting that Taunton’s got it’s own game and it’s featuring so many landmarks”

Monopoly also announced four charities who made the board,

They were all thrilled as it will really help make them well known and help raise their profile of the good work they do in the Taunton community.

Graham Barnes who represents Winning Moves commented; “We had thousands of suggestions and 34 have got their own squares and several others embedded in the cards and congratulations to them all.”

The images were supplied by local photographer Craig Stone.  The game can be bought in several Taunton shops including Taunton Visitor Centre, Argos, Asda, County Stores, The Range, Waitrose, Waterstones and WH Smith. The game is also available online from Amazon and www.winningmoves.co.uk.