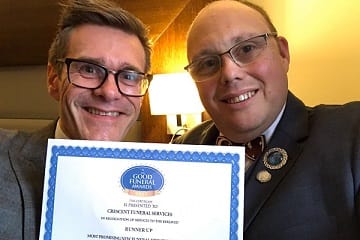 A promising new Taunton business, Crescent Funeral Services, was runner-up in the Most Promising New Funeral Director category at a ceremony in London on Thursday (Sept 7th).

They were also finalists for ‘Best Modern Funeral Director’. Crescent Funerals was selected from hundreds of nominees across the country to go through to the final of the Good Funeral Awards and was up against 11 other finalists in the category.

Simon Helliar-Moore opened the firm last year after over 20 years of working for both independent and larger nationwide firms, the last 10 years being with Nigel K Ford, in Taunton.

Simon said.  “It is a great honour and privilege to be commended in this way showing promise to the future of the independent funeral profession. Over my career, I have taken everything that is good and put it into Crescent Funeral Services to provide Taunton with a truly independent funeral service and director that they can place their trust in. “The Good Funeral Awards are now in their sixth year and recognise excellence in the sector.”

Brian Jenner, the event organiser, said: “The awards recognise all those unsung heroes who work so hard for the bereaved and whose role can so easily be overlooked. Some of the nicest people in Britain work in the funeral business.”

For more information go to www.goodfuneralawards.co.uk or contact Simon and his team at Crescent Funeral Services on 01823 530100 or click HERE