As part of their ‘Brewhouse at 40’ celebrations, the Brewhouse Theatre will be hosting their first external production in the beautiful surroundings of St Mary Magdalene Church in Taunton on Tuesday 11 July.  They have collaborated with BBC Radio 3 to produce a radio broadcast of a concert that will feature the BBC Singers and conducted by international Conductor and Composer Eric Whiteacre.  The evening will be presented by BBC Radio 3 host of the Choir, Sara Mohr-Pietsch and will feature a UK Premiere of Whitacre’s new work ‘I Fall’. 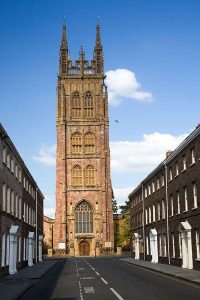 Grammy-winning composer and conductor Eric Whitacre is one of the most popular musicians of our time. His concert music has been performed throughout the world by millions of amateur and professional musicians alike, while his ground-breaking Virtual Choirs have united singers from over 110 different countries. A graduate of the prestigious Juilliard School of Music, Eric was recently appointed Artist in Residence with the Los Angeles Master Chorale having completed a five-year term as Composer in Residence at Sidney Sussex College, Cambridge University, UK.

As conductor of the Eric Whitacre Singers he has released several chart-topping albums including 2011’s bestselling Light and Gold. A sought after guest conductor, Eric has conducted choral and instrumental concerts around the globe, including sold-out concerts with the London Symphony Orchestra, Royal Philharmonic Orchestra and the Minnesota Orchestra. In addition to several collaborations with legendary Hollywood composer Hans Zimmer, he has worked with British pop icons Laura Mvula, Imogen Heap and Annie Lennox.

The BBC Singers hold a unique position in British musical life. Performing everything from Byrd to Birtwistle, Tallis to Takemitsu, their versatility is second to none. The choir’s unrivalled expertise in performing the best of contemporary music has brought about creative relationships with some of the most important composers and conductors of the 20th and 21st centuries, including Poulenc, Britten, Judith Bingham and Sir Peter Maxwell Davies.

Chief Executive of The Brewhouse, Vanessa LeFrancois said “‘The Brewhouse are committed to raising the profile of Taunton and attracting more people to the region through world-class arts experiences.  Eric Whitacre and the BBC Singers concert will be broadcast on BBC Radio 3 and accessed globally via BBC iPlayer.  What a wonderful event to present in the venue’s 40th anniversary.”

There are limited tickets still available by calling the Brewhouse Box Office on 01823 283244 or by visiting the website Here.