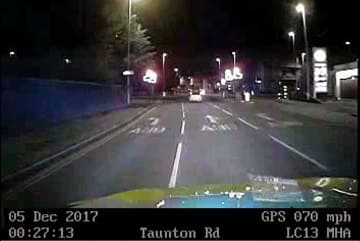 A driver who reached speeds of 75mph in a 30mph zone after failing to stop for police has sentenced.

He was given a 20-month suspended jail sentence and was disqualified from driving for two years. He must also complete unpaid work and pay court costs.

PC Owen Davies tried to stop a Ford Fiesta being driven by Molloy on the M5 between junctions 23 and 24, at about 12.25am on Tuesday 5 December, as he was driving at 96mph through roadworks, where there was an advisory limit of 40mph in place.

Molloy failed to stop and left the M5 at junction 24, heading into Bridgwater. During the pursuit, Molloy drove on the wrong side of the road, crossed double white lines, went through red lights on a crossroads at 70mph, mounted and drove across a pavement and reached speeds of 75mph in Taunton Road, where the limit is 30mph.

At one point, an Audi travelling in the opposite direction was forced to take evasive action to avoid a collision as Molloy drove straight towards it.

PC Davies, of the Tri-Force Roads Policing Unit, said: “Callum Molloy had no regard for other road users’ safety that day and drove at extremely dangerous speeds during the pursuit.

“Towards the end of the incident he was continuing to drive despite the vehicle suffering two blown tyres.

“His actions could easily have had fatal consequences had he been in collision with another motorist or pedestrian.”