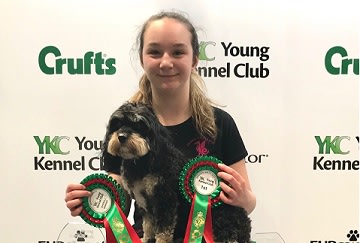 Emma, who is 15 and in Year 11, competed over three days – finishing third on Friday in the ABC (Anything But Collie) Agility class with her faithful friend.

The next day, the pair came second in the Crossbreed competition in which the judge looks for a healthy crossbreed and at the handling skills and rapport between the dog and owner.

But they saved the best until last when they made it to the top of the podium on Sunday.

Emma and Athena came first in Graduate Agility in the 12-17 age group and then won overall – coming first against all competitors in all age groups and all heights of dog.

“I can’t believe we actually won at Crufts. It’s a dream come true,” said Emma, who was also interviewed on Channel 4 during the world’s most famous dog event.

Her mum, Nicky, added: “I am so proud of them. Dreams really do come true with determination, dedication and hard work.”

Emma and Athena competed in various events throughout last year and, once all of the points were submitted to the Kennel Club, the top 20 scorers in the country went forward to Crufts.

It is an even greater achievement as Athena is still young – not even three – and 2018 was their first year of competing.

Their trainer, Nicole Shaw, said: “What a great first year they’ve had and what a team Emma and Athena have become!”