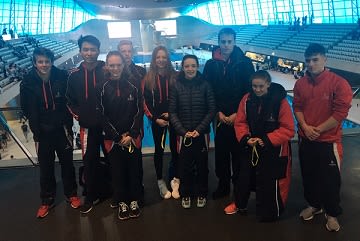 On Friday, 8th March the senior swimmers travelled to London Aquatic Centre to compete in The Bath Cup, a long-standing Under 19 swimming relay competition between over 80 HMC schools from all over the country.

Despite the fact that the girls were technically an Under 15 team, they swam in a strong heat in the 4x50m freestyle relay, finishing in 4th place. Unfortunately this ranked them in 11th place over all, just missing out on the finals by one place.

The boys’ team were up next in the 4x100m freestyle relay, where they swam hard to finish their heat in 7th place. Unluckily, their time meant they also just missed out on the final.

Expectations were high for the girls 4x50m medley relay, and they performed well, coming 4th in their heat and qualifying for the final in 8th place. Head of Swimming at Taunton School Lisa Manley said: “In the final they stepped up another gear, swimming over a second faster than their heat time. However, so did the other teams meaning they finished in 7th overall in the country. Still an amazing achievement for such a young team.”

The boys also had a strong swim in their medley relay, although were unable to gain a final place.