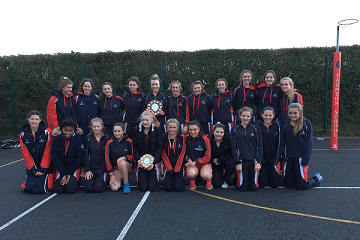 The under 15 and under 19 Netball teams at Taunton School have beaten off the competition to both become County Champions in their age groups.

Having come third in the National Schools Tournament in the Autumn term, the U19 squad were determined to show their improvement and hard work. Their Coach and Taunton School Director of Sport Hayley Mortimer said “The girls worked tirelessly throughout the whole tournament and I could not be prouder of them. It pleases me that my job was pretty easy really – I just went along to watch some cracking netball!”

The Under 15 netball squad also saw off the competition winning all of their games in the County Cup competition, beating King’s College, Wellington School, Wells Cathedral School, King’s Bruton and Queen’s College.

Coach Carol Manley commented “Despite limited practice due to adverse weather, the team was focussed and produced an outstanding level of netball. The girls went out with a really positive attitude and deserved to finish unbeaten and County Cup Champions.”

Taunton School’s Head of Netball Lisa Manley added “This is a great achievement to retain both county cups for the second year running. I’m very proud of the hard work that’s gone on throughout the season from all of the netball squads and coaching staff.”