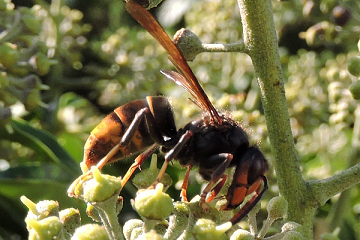 The Somerset Beekeeper’s Association (SBKA) will help raise awareness of Asian hornets at the House of Commons Science and Technology Committee on Monday (June 25).

“Asian hornets pose a very real threat to honeybees in the UK and I am delighted that we have been given this opportunity to highlight how our approach is guided by the latest scientific research,” she said.

The yellow-legged Asian hornet (Vespa velutina) is a non-native species which is colonising parts of Europe, killing honeybees and other insects. Although instances of Asian hornets in the UK have only been recorded on a few occasions in the last two years, beekeepers and environmentalists fear numbers will inevitably increase.

“As a result we have developed links with Exeter University, who are conducting research in Europe where the Asian hornet has become widespread. Based on their findings, we have chosen to take a ‘recognition and reporting’ approach,” she added.

Sightings reported to the Non-Native Species Secretariat trigger the deployment of bee inspectors who track the hornets back to their nests and destroy them.

Anne Pike is one of two dozen speakers from national and regional community groups taking part in a week of briefings and events to remind MPs and peers that reliable evidence matters in many walks of life.

“In the case of beekeepers, evidence matters to us because it has allowed us to be prepared and identify the best strategies to protect our bees,” she said.

Asian hornets are most active between April and November (peaking in August/September). Somerset Beekeepers has published an identification guide on their website along with how to report sightings. www.somersetbeekeepers.org.uk