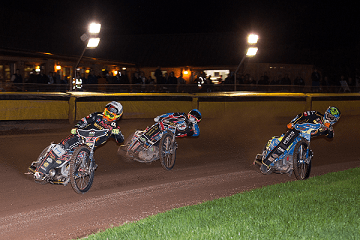 The ‘Cases’ Somerset Rebels ended their 2017 season with an emphatic win over league runners-up Wolverhampton, but the Rebels 16-point winning margin was still insufficient to see them progress through to the KO Cup Final.

Going into the match having suffered a 28-point defeat in the 1st leg at Wolverhampton, Somerset got off to the worse possible start when the visitors opened-up matters with a 5-1 heat advantage to stretch out their overall lead to 32 points, but the Rebels hit back to put themselves into a 6-point lead on the night after 4 heats of this 2nd leg.

But Somerset’s hopes of building up a head of steam with which to put Wolves under pressure were thwarted as the next 6 heats were all to see a share of the spoils, the last of which, in heat 10, virtually sealed the overall tie for Wolverhampton.

Despite this, however, the Rebels were determined to end the season on a high, and successive maximum race wins for Somerset in heats 11 and 12 saw them extend their lead on the night to 14 points, and although two further draw heats were to follow, Somerset rounded off the match, and with it their 2017 season, with a 4-2 heat win in the final race of the night, Richard Lawson rounding out a superb night in completing a flawless 6-ride paid maximum for the Rebels.

“It was always going to be a tough ask to overturn that 28-point 1st leg deficit,” said Somerset team manager Garry May afterwards, “but the boys gave it absolutely everything tonight and put in a superb performance.”

“Even though Richard [Lawson] was in a class of his own in riding to a six-ride paid maximum, this was still an excellent all-round team effort, but although it was not quite enough to see us through to the KO Cup Final, the boys can feel rightly proud of their performance tonight, it being a more than fitting way to bring the curtain down on our 2017 season.”