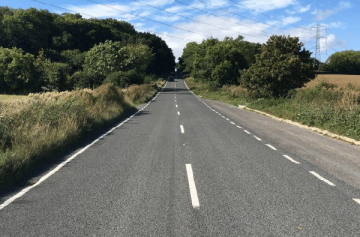 The Police and Crime Commissioner (PCC) Sue Mountstevens has praised the hard work of Avon & Somerset Constabulary’s Roads Policing Unit following a reduction in the number of serious injury collisions on roads across the area of more than 21%.

Nationally, Avon and Somerset Police is the ninth most improved force for reducing the number of people killed or seriously injured (KSI) in collisions on the road.

PCC Sue Mountstevens said: “It is encouraging to see such a big reduction in the number of KSI collisions on our roads. Although one life lost in a collision is one too many, thanks to the hard work of the Roads Policing Unit, our roads are becoming increasingly safer for all road users.”

“Ahead of a busy bank holiday, it’s important that we remind people to be tolerant of one another on our roads. I know road safety is a concern for local people and drivers using the roads unsafely can have a devastating impact on others and their families.”

“We will continue to work with our local partners including Highways England, Local Authorities and Fire and Rescue Services to keep our roads safe and educate local people on the dangers of driving unsafely.”

“Local people can also make a difference by joining a Community Speedwatch Scheme (CSW) and working alongside Avon and Somerset Police.”

Damien Devanny, Avon and Somerset Police Road Safety Continuous Improvement Officer added: “Road Safety is a key priority for us and we have worked hard over the last couple of years to ensure we are best placed to understand and respond to incidents on the road. Not only working internally with our Roads Policing Unit, we are continuing to enhance how we use multi agency data to further evidence where we can improve the safety of our roads.”

The PCC continues to be instrumental in prioritising road safety for all road users.

February 2015 saw the start of a phased roll out of 29 speed cameras being re-activated across the area after 20 cameras were acquired by the Constabulary. The PCC bought a number of fixed speed cameras for £1 from local authorities after national research showed cameras had a positive impact on driver behaviour. She also ensured the Roads Policing Unit was better equipped by purchasing an additional three enforcement motorcycles in 2014 to support the nine speed enforcement vans.

Since 2017 there has been a dedicated unit to deliver road safety across Avon and Somerset and this team works with local partners to deliver education, enforcement, and traffic management to make the road safer for all road users.

Most importantly, the constabulary help organise and deliver voluntary speeding education courses to approximately 140,000 local drivers each year. There are approximately 166,000 drivers who are caught speeding throughout the force area each year and the remaining 26,000 either receive a fixed penalty or go to court. The revenue generated through speed courses goes towards cost recovery and the Road Safety Fund, where local people can apply to up to £5,000 to support initiatives that help keep the roads safe.

The unit is also supported by local people through Community Speedwatch Schemes (CSW). There are currently 131 schemes in Avon and Somerset, giving local people the opportunity to actively get involved in keeping their roads safe. In 2018, Avon and Somerset Police sent educational warning letters to 36,000 drivers as a result of CSW observations.