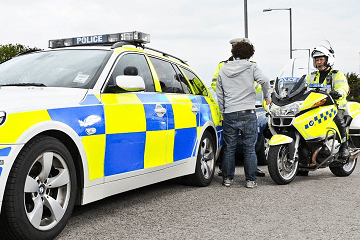 Tri Force officers from Avon and Somerset, Gloucestershire and Wiltshire were out in marked and unmarked vehicles, proactively targeting drivers breaking the law on our roads last week as part of their annual road safety action day which saw intensified patrols along the M5 corridor around Exeter and Taunton.

The risks of dangerous driving were explained to offenders and they were also issued penalties or prosecuted where appropriate. Compulsory education sessions were also run in Taunton Deane Service station by Devon and Somerset Fire and Rescue & Somerset Road Safety who provided professional, practical advice alongside the police.

Officers working in the Avon and Somerset force area were based in Taunton Deane Service station and made the following interventions;

Superintendent Andy Williams, Head of Road Safety at Avon and Somerset Police says; “Dangerous driving puts your life and the lives of others at risk. It’s easy for drivers to make mundane excuses for checking their phone, speeding or not wearing a seatbelt, but these dangerous habits needlessly endanger other road users. Take a moment, consider these risks and think about small changes you can make to improve your driving.”

The M5 is one of the most important roads in the region and we are committed to making it safer for drivers. Our work spans from road safety interventions such as Op Tramline to regular law enforcement and traffic management activity. In 2017 we attended 100 ‘injury collisions’ along the M5 which resulted in 248 casualties. Of these casualties, 6% were either fatal or classified as serious. Many of these collisions were caused by one of the ‘fatal four’ which are the most common causes of accidents on our roads.

The fatal four are widely recognised as the following;

If you see a driver breaking the law on the road, you can repot them online HERE