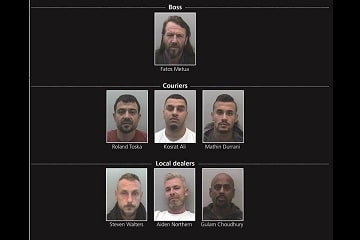 An organised crime group who flooded Devon and Somerset with more than £1 million of cannabis has been sentenced to more than 27 years in prison.

The gang from the West Midlands made numerous trips to the South West with significant packages of the Class B drug between April and October last year.

The drugs were delivered to high-level dealers in Exeter, Crediton and Tiverton in Devon and Wellington in Somerset before being distributed locally.

This week the 10-strong drug network was sentenced to 27.5 years for conspiracy to supply cannabis.

Seven members were sent to prison including the ringleader Fatos Metua, 46, who was jailed for five years and four months. The other three received suspended sentences and/or unpaid community work.

The sentencing at Exeter Crown Court was the culmination of Operation Corinth, a complex investigation led by the South West Regional Organised Crime Unit [SW ROCU] with the support of Devon and Cornwall Police and West Midlands Police.

The investigation uncovered an organised crime group led by 46-year-old Fatos Metua who controlled proceedings from Wolverhampton. He used couriers to transport the drugs to the South West dealers using trains and vehicles three to four times a week.

His couriers were three Wolverhampton men – Roland Toska, 37, Kosrat Ali, 25, and Mathin Durrani, 21, who used a variety of vehicles to transport the drugs and the cash profits between the West Midlands and the South West.

The drugs were supplied to three different drug syndicates in Exeter for onward distribution:

Roy Walters, aged 72, from Yeoford in Devon met the Wolverhampton couriers in Exeter, making cash payments for drugs which had been delivered to his son, 37-year-old Steven Walters from Copplestone. Steven then distributed the drugs in mid-Devon.

Aidan Northern, 29, from Wellington, collected drugs from the couriers before storing them with his criminal associate, 36-year-old Neil Mounce from Exeter. The drugs were then distributed in Exeter, Taunton and Wellington. Northern made regular large cash payments to the couriers following drug sales.

Gulam Choudhury, 44, from Exeter had quantities of drugs delivered to his home and his criminal associate, 40-year-old Hannan Miah, from Topsham, by the couriers. They then supplied local associates in Devon and Cornwall. Choudhury made regular cash payments to the courier from his home.

Since the investigation into the conspiracy began on 1 April 2017, couriers Toska, Ali and Durrani made 34 journeys from Wolverhampton to Exeter to deliver drugs and collect cash.

In addition to the supply runs Toska travelled regularly to Exeter via train to collect cash from the city dealers. He made 22 trips since 1 April.

Toska’s movements and meetings in Exeter were all orchestrated by Metua, the head of the crime group. Phone evidence showed that he was the conduit, contacting Toska before and after meetings that he had arranged with Walters, Choudhury and Northern via his mobile phone.

After Toska concluded his business in Exeter he sent text messages to Choudhury and Northern in the form of a sum showing their outstanding debt.

The three couriers were arrested on the 28 September 2017 when they attempted to deliver a further consignment of drugs to Miah in Topsham. Metua was arrested in Wolverhampton where a series of search warrants were executed. Choudhury and Northern were also arrested on the same day in Exeter.

All of the group pleaded guilty to the offence of conspiracy to supply Class B drugs except for Ali, Miah and Durrani who elected trial at Exeter Crown Court.

Of the other three dealers, Roy Walters received a four-month sentence suspended for 12 months for conspiracy to supply cannabis and money laundering, Hannan Miah will carry out 200 hours of community work after admitting the lesser charge of being concerned in the supply of cannabis and Neil Mounce was given a two-year suspended sentence and 150 hours of unpaid community work.

Deputy Senior Investigating Officer Detective Sergeant Daniel Bickford, from the SW ROCU, said: “Operation Corinth was a complex investigation led by the South West Regional Organised Crime Unit in conjunction with Devon and Cornwall and West Midlands Police which tackled an organised crime group from Wolverhampton supplying over a million pounds worth cannabis into Devon and Somerset.

“The crime group’s head Metua led other members in the conspiracy to supply cannabis from April 2017 until October 2017.

“Significant quantities of drugs were transported from the West Midlands to Devon where they were repackaged into smaller amounts to be sold on the street.

“The jailing of this group sends a strong message to those engaged in serious and organised crime in the south west that they will be pursued and brought to justice.

“Operation Corinth is an excellent example of local forces working with us on a regional level for the good of local communities.”