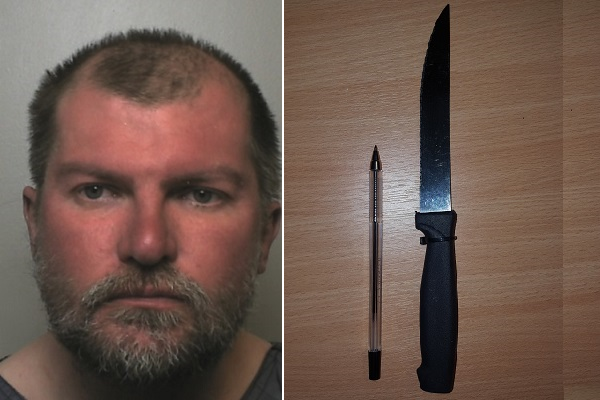 January 12, 2017/ by Stuart Wright
An habitual knife carrier, who alarmed passengers when he flashed  a large kitchen knife on a train to Taunton, has been jailed for 12 months.
A woman alerted train staff after Gareth Lewis sat opposite her and began to scrape a piece of wood with a six-inch kitchen knife on 7 November.
The train manager called police who met the service at Taunton and searched the 41-year-old’s bag, seizing the weapon.
Lewis, of no fixed address and who has ten convictions in the last nine years for carrying knives, was arrested and subsequently charged with possessing a bladed article in a public place.
He admitted the offence and on 6 January, was sentenced to 12 months behind bars at Taunton Crown Court.
PC Dan Burley from BTP said: “Nobody should ever get on a train and be confronted by someone sat opposite them who then whips out a kitchen knife.
“But, thanks to the concern of a member of the public, the alarm was raised and we were able to take swift action which resulted in Lewis being detained and subsequently jailed for a considerable stretch.
“Knives cost lives and there is never any reason to carry one in public. Lewis is a persistent offender and we are satisfied with the sentence handed to him, which we hope will give him time to reflect on his dangerous conduct.”