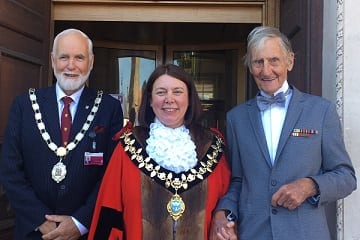 The 96-year-old D-Day veteran helped 40 Commando hoist the flag outside County Hall on Monday ahead of Armed Forces Day this Saturday (30 June) – a day to show support for the men and women who make up the Armed Forces community.

Mr Booth was part of a top-secret team of submariners who scouted beaches off Normandy ahead of the World War Two D-Day landings.  He made national headlines recently when he was the victim of a horrific attack during a raid on his Taunton home.

Mr Booth said: “It was a great honour. I don’t know why they chose me but I suppose someone had to do it and I’ve been in the news a bit locally. It’s absolutely vital that the public knows about us, supports us and realises what service people do.”

Also present at the flag ceremony were the Leaders of the County and District council, Cllrs David Fothergill and Cllr John Williams; along with by Rear Admiral Tim Lowe CBE, the National Hydrographer and Deputy Chief Executive of the UK Hydrographic (UKHO), and representatives from 675 Squadron Army Air Corps and various local Ex-Services Associations.

The event would usually take place at Taunton Deane Borough Council’s offices but due to building works the County Council is hosting this year.

40 Commando Royal Marines will be exercising their Freedom of the Borough of Taunton Deane on Saturday at 11am, celebrating 35 years being based at Norton Manor Camp with a spectacular parade through the County Town.

Parking will be at a premium on the day, so those living in Taunton are advised to walk or cycle if possible. If you’re travelling in, please arrive early and use the public car parks. All car parks will be open as normal on the day – but cars will be held in The Crescent car park between 11.30am and noon while the parade passes.

Motorists are advised to allow extra travel time, whether or not they are coming for the parade, as there will be a number of town centre road closures from 9am until 1pm.

Events will be taking place across the county on Armed Forces Day, including a Flying the Flag Family Fun Day at Riverside Park and Wyndham Park in Yeovil between 11am and 2pm. Activities will include den-building, fire lighting, survival skills, bug-hunting, crafts, and a street fair with stalls and refreshments.