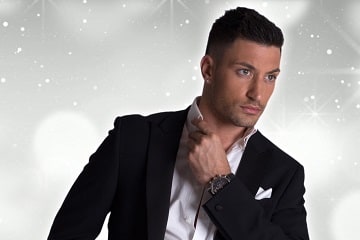 Giovanni Pernice, this season’s favourite to lift the coveted Strictly Come Dancing glitter ball with Debbie McGee, is excited to bring his brand new dance show ‘Born to Win’ on tour around the UK and Ireland in 2018, after his 2017 ‘Dance is Life’ tour took the UK by storm!

Giovanni will be joined by 7 more professional dancers, including Luba Mushtuk, as his leading lady.

Luba has most recently been seen dancing on the BBC hit show with Giovanni, to the vocal talents of musical theatre star, Sheridan Smith.

The show will tell an epic tale of love and passion, with dances such as the Paso Doble and the Argentine Tango, plus you can expect other favourites like the Charleston, the Viennese Waltz and of course it has to have the Jive, seeing as Giovanni is the current Guinness World Record Holder for having the world’s fastest jive kicks and flicks!

Strictly Come Dancing has seen Giovanni take 59 year old Debbie McGee to the top of the leaderboard an amazing three times already this season, including a perfect score of 40 for their Tango in only week seven! It will be another one for the record books for Giovanni if he bags the glitter ball with Debbie – she would be the oldest celebrity to win the show by twenty years, after Chris Hollins!

Tickets are now on sale directly through The Brewhouse website

There are also a limited number of VIP tickets available at most venues, where people can meet Giovanni before the show, get a signed print and have photo opportunities.