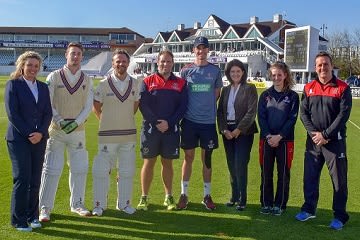 Somerset County Cricket Club are pleased to be able to announce that we will be continuing our long-standing relationship with King’s College and King’s Hall School.

This renewal of the current agreement between the organisations will see the partnership take on a new and fresh direction which will be of greater benefit to both parties, whilst also maintaining the strong link between the Club and one of the region’s most highly regarded education providers.

Both Somerset County Cricket Club and King’s have a long tradition of sporting excellence on the field of play and have played a vital role in the development of young sportsmen and women in Somerset for over 100 years.

As part of the new partnership, King’s will be sponsoring James Hildreth, Eddie Byrom and Nathan Gilchrist in 2019.

Somerset CCC Commercial Sales Director, Suzanne Roper said: “We have been working successfully with King’s for a number of years but we both felt that it was time to refresh our partnership. We both have an important role to play when it comes to young people in the region achieving their sporting dreams and we are delighted that we can now build on what has already been a very successful relationship.”

Justin Chippendale, Headmaster at King’s Hall School said: “We are thrilled to be continuing our strong relationship with SCCC and are keen to make even better use and create even closer ties surrounding the younger age groups. There is such a strong cricket tradition within our school, and we are all looking forward to both girls and boys enjoying the season ahead.”