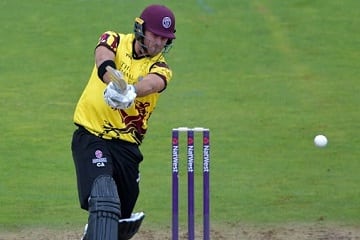 Somerset County Cricket Club can exclusively reveal that New Zealand all-rounder Corey Anderson will once again be joining the Club for this year’s Vitality Blast.

Importantly the 27-year-old will be available for the entire competition, which begins with a home clash against local rivals Gloucestershire at the Cooper Associates County Ground on July 6th.

Corey made a real impression for Somerset in the four T20 matches that he played in 2017, including an explosive debut at Surrey where he smashed his way to 81 from just 45 balls.

Corey has featured in a total of 29 IT20 matches for New Zealand, scoring 432 runs with a highest score of 94 not out. He has also played in 100 domestic T20 matches, scoring over 1700 runs. In addition to this, Corey has also represented his country in 49 ODI’s and 13 Tests.

After agreeing to re-join the Club, Corey said: “I’m really excited to be returning to Somerset for this year’s Vitality Blast. Having had my time at Taunton cut short with injury last season, I feel I have unfinished business and I hope I can help Somerset go all the way in 2018.”

Somerset Director of Cricket, Andy Hurry said: “We are delighted to have secured Corey for the entire Vitality Blast campaign. I believe that continuity throughout this competition is going to be key in achieving success and therefore it was crucial for us to be able to bring in a high-quality player who would be available for the duration of the tournament.

“Corey has a vast amount of experience and is very well known here at Somerset. His all-round ability will have a huge impact on our performances.”