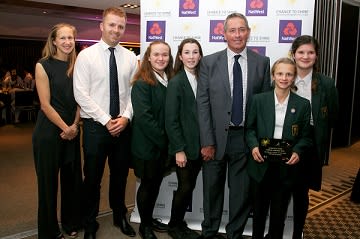 The Castle School, Taunton, was named Secondary School of the Year at the Chance to Shine Awards on Wednesday 21st November.

The judging panel noted that The Castle School is providing its pupils with an incredible quality of coaching and opportunities. They have been very successful in the Chance to Compete competitions for a number of years.

The judges also remarked that The Castle School understands what cricket can do for its students and how cricket can make a difference to their lives. Cricket is used to engage pupils with learning and social communication difficulties and is building their confidence through the sport.

The Chance to Shine Annual Awards, supported by NatWest, celebrates clubs, individuals and schools who help to spread the power of cricket and make the charity such a success.

Chance to Shine has been working since 2005 to reverse the decline of cricket in state schools. By providing coaching in schools and extra-curricular opportunities, the charity has reached more than four million young people, 46% of whom are girls, in over 14,000 states schools across the country.

After receiving their award, Russ Jones, Head of PE, said “I’m absolutely delighted to win and I think the girls are even more excited! It’s recognition of all the hard work that we’ve done and shows that it’s worth something.

“The girls are learning the skills of the game but it’s also life skills that they’re picking up that will help them later in life, skills like teamwork, communication and leadership.”

England Cricket legend Graham Gooch, who attended the event, said “I’d like to congratulate The Castle School for their commitment to cricket and it was inspiring to hear about their cricketing journey. Lord’s has been home to some of the great cricketing stories over the years but tonight is right up there.”

“It’s been terrific to learn about the fantastic work that’s going on around the country to make cricket accessible to children and young people. Chance to Shine are working exceptionally hard to give opportunities to thousands of young people every year and it’s really paying off.”

Laura Cordingley, Chief Executive at Chance to Shine, added, “On behalf of everyone at Chance to Shine, I’d like to say a big congratulations to The Castle School. Their hard work, commitment and dedication to the sport over the past year has been brilliant and we are very proud to be associated with such an outstanding school. We believe that cricket can have a significant positive impact on the lives of children and young people across the country and their story is a shining example of this.”

Find out more at chancetoshine.org