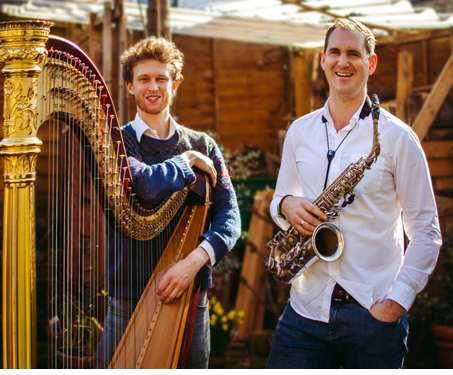 STOGUMBER FESTIVAL – 2nd and 8th September
The annual Stogumber music festival brings top class musicians to this pretty West Somerset village. There are both free events and paid for concerts as detailed below:

2nd SEPTEMBER
3pm: World-class musicians Oliver Wass (harp) and Huw Wiggin (saxophone) in concert
These musicians are truly great virtuosi in their own right. Last year Oliver was the first ever harpist to be awarded the prestigious Guildhall Gold Medal and has performed at many of the major London venues, as has Huw Wiggin. Huw is professor of saxophone at the Royal Academy of Music and is a former Commonwealth Musician of the Year. Their varied programme will cover a range of works by Albonini, Bach, Debussy and Rachmaninov. The event takes place at St Mary’s Church, Stogumber (TA4 3TA) and tickets, priced at £8 and £15 each, are available from the Festival website (www.stogumberfestival.com), by calling 0845 539 0168 or from Central Stores, Stogumber (01984 656214).

7.30pm Song recital featuring Karina Lucas (mezzo-soprano) with accompaniment by Rory Russell (guitar)
A highly accomplished artist, Karina Lucas studied at the National Opera Studio and Royal Northern College of Music and has performed at the Royal Opera House and with Opera North. For this concert she will be accompanied by Rory Russell, who is also a member of the well-respected Aquarelle Guitar Quartet. The wide programme will include a selection of baroque arias by Handel and Gluck, traditional Celtic pieces such as the Skye Boat Song, works by Benjamin Britten and Catalan folk songs. Tickets are £10 and £20 and are available as above.

5.00pm Free music and dance performances in the Village Square

7.30pm BBC Folk Award winning singer/songwriter SAM KELLY and banjo player JAMIE FRANCIS
Cornwall-based singer/songwriter and multi-instrumentalist Sam Kelly was the Horizon Award winner at the 2016 BBC Folk Awards and has been praised by the likes of Kate Rusby and Seth Lakeman. For this gig, he will duo with the talented, young banjo and guitar player Jamie Francis. Sam is rediscovering the sounds of his Gaelic heritage and creates exciting, up-beat music that transcends the boundaries of traditional folk and popular music. The concert takes place at St Mary’s Church, Stogumber (TA4 3TA) and tickets, which are priced at £10 each, are available from the Festival website (www.stogumberfestival.com), by calling 0845 539 0168 or from Central Stores, Stogumber (01984 656214).

9.30pm Free music at the White Horse Inn, Village Square with Ben Cipolla
Ben is an up-and-coming singer-songwriter who fuses acoustic pop with reggae, rap and swing. He is a ‘BBC Introducing’ artist who has been featured on Clare Teal’s Radio 2 show and, more recently, at the BBC Proms at the Albert Hall.