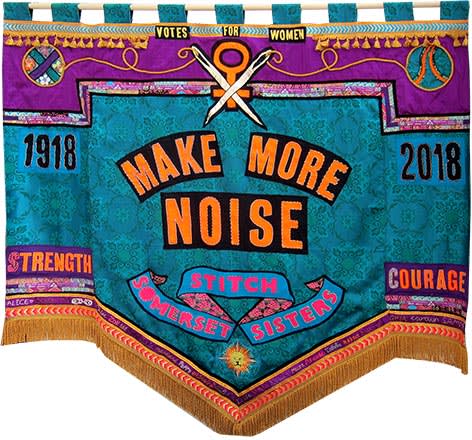 Somerset Rural Life Museum and Somerset Art Works are delighted to present a new exhibition marking the centenary of the Representation of the People Act. The Act gave the first British women the right to vote.

Processions: Two Banners, One Voice opens at Somerset Rural Life Museum on 16 June. It will display a rare original suffrage banner created by the Weston-super-Mare branch of the National Union of Women’s Suffrage Societies alongside a contemporary banner created by students from Strode College in Street.

Artist Dorcas Casey worked with students from Strode College Art Department to design and create the contemporary textile banner. It is one of 100 commissioned centenary banners that formed part of PROCESSIONS, a mass participation artwork that took place on 10 June. Students from Strode College joined women and girls from across the UK who came together in London to process the banners.

The banner they made is influenced by original Suffrage banners and encorporates the unique culture of the county. Glastonbury Festival wrist bands are woven into the design.