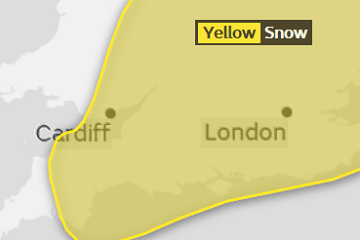 The MET Office has issued a yellow warning for snow across Somerset.

Temperatures are to drop with over night lows of around -3 degrees on Saturday and Sunday so icy conditions are expected.

A MET office spokesperson commented, “Snow showers are likely throughout Sunday, and where these converge some snow may well accumulate and could then prove disruptive. There is a small chance that snow may fall for a longer period across southern areas.”

The Chief forecaster added, “Not all places will see snow showers, but where they do form locally 1-3 cm of snow is possible in places. Furthermore, showers may become organised into bands at times resulting in locally around 5 cm accumulating, with this most likely near the Thames Estuary and the Wash. Some melting of lying snow is expected during the middle of the day. Should the small chance of a more organised band of snow affecting the southern and south eastern regions come into fruition, a more widespread 2-5 cm could be possible here, with some low level areas seeing 10 cm. High ground could see locally 10-20 cm. Some isolated ice patches may form where run off from saturated fields freezes overnight.”