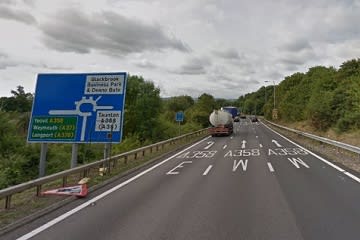 A multi-million pound scheme to upgrade the busy M5 Junction 25 roundabout at Taunton is now underway with hundreds of trees relocated to a nearby conservation area.

Representatives from Somerset County Council were joined by principal contractors Alun Griffiths, funding partners and others on site today to mark the start of advance site clearance works.

The £19.2m upgrade will increase the capacity of Junction 25 to improve traffic flow, ease peak hour congestion and unlock land for employment to the east of the M5.

Although the main construction programme does not start until later in March, clearance works have now begun with around 200 established trees removed from the site and replanted at the West Monkton Country Park.

Councillor John Woodman, Somerset County Council’s Cabinet Member for Highways, said: “A lot of work has been going on behind the scenes for a long time to bring these much-needed improvements forward but it’s fantastic to finally see action on site.

“This scheme will benefit many thousands of drivers who use this busy junction each day as well as opening up land for employment so this is a significant and very welcome milestone.

“We’re committed to working closely with the community to mitigate against the impact of the construction and it’s great to start in a positive manner by relocating these trees to the Monkton Heathfield Country Park.”

Norman Cavill, of West Monkton Parish Council, said: “We were very pleased to be offered the trees and it’s fantastic that with the assistance of many volunteers we were able to relocate them. We have taken 200 trees and have hopefully gained seven years of growth with three rows now running parallel along a 300m stretch of the A3259 at West Monkton. This is a tremendous bonus for our Country Park.”

Dr Simon Dunn, Griffiths’ Operations Director South West, said: “We are delighted to be making a start on this key project to ease future traffic congestion at this important interchange. Working with the local community and road users is very important to Griffiths and we would like to restate our commitment to being a good neighbour and minimising disruption throughout construction.”

The upgrade involves full signalisation and enlarging of the roundabout, widening of the eastern exit, a new roundabout to access the proposed Nexus 25 employment site, and safer pedestrian and cycling facilities.

“We’ve allocated £12.186m to the scheme, and it’s one of our largest Growth Deal projects. It will improve access from the north and the east of the UK, and international markets, so I am delighted to see it starting on site.”

Minister for Local Growth, Jake Berry, said: “This Government is committed to boosting economic growth across the whole of the UK and building a Britain fit for the future.

“Improving journey times is central to our plan for a stronger, more resilient Heart of the South West economy.

“This is an important gateway to Taunton and the improvements, made possible by £12.186 million of investment from the Local Growth Fund, will significantly benefit commuters and local people as well as unlocking land for new businesses and jobs in the Heart of the South West.”

Cllr John Williams, Leader of Taunton Deane Borough Council, said: “The Council’s contribution of £1.5m towards the Junction 25 improvement scheme demonstrates our commitment to the growth and development of Taunton.

“It forms part of a £16m package of funding using the New Homes Bonus which is awarded on the basis of our housing growth, so it is appropriate that this is used to help deliver major infrastructure projects such as this.

“The J25 improvements, and those to other main routes, are important for the long term connectivity and economy of Taunton, and together with the planned Nexus 25 employment site, represent a significant opportunity to bring new business and investment to the County town.”

James Cinicola, of Henry Boot Developments, said: “The upgrade to Junction 25 brings a host of benefits, including the creation of an essential access road to our 25-ha employment scheme, Nexus 25. The scheme will prove a real catalyst not just for Taunton, but for the wider county, securing investment, boosting skills and creating thousands of new jobs.”

Junction 25 currently experiences congestion in both peak hours, with queues frequently extending along the A358 in both directions and it will help address issues with backing up onto the M5.

The scheme aims to improve journey times, reduce congestion, improve Park & Ride journey time reliability and create a more attractive gateway to Taunton, Yeovil and the A303 from the M5. The scheme will also unlock access into the proposed Nexus 25 employment site and support other planned growth across Taunton.

The J25 scheme, which is expected to take two years to deliver, has also been planned to run alongside future planned improvements at the Creech Castle junction on Toneway in Taunton. This scheme is currently being developed but works are expected to begin in 2020. Co-ordinating them to overlap in this way should reduce the impact on motorists by reducing the overall timescales compared to running them consecutively.

The main construction programme is due to begin in late March and two community drop-in events will be held to give people chance to see the plans in detail and discuss the plan for delivery.

These will be held at Ruishton Village Hall between 3pm and 8pm on Thursday 7 March and Thursday 14 March.

You can stay up to date with roadworks as well as checking for live travel incidents at travelsomerset.co.uk or by following @TravelSomerset on Twitter.