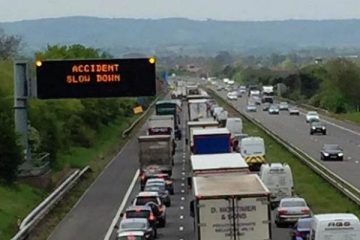 A woman has been cut free after a crash with a lorry on the M5 today, Feb 19th.

The crash happened between J24 Bridgwater and J25 Taunton on the southbound side of the motorway just before 2.30pm and closed the motorway.

A spokesperson commented “Fire appliances from Bridgwater and Burnham on Sea together with an officer from Taunton and the Rescue Tender from Taunton were mobilised to a report of an RTC involving a car and a lorry, with the car being located in the central reservation.”

“Upon arrival crews made the scene safe and liaised with Ambulance personnel to formulate a plan to extricate one female that was still within the car.”

The Fire service used hydraulic cutting equipment to remove the door of the car before removing the female and handing her over into the care of the paramedics on scene.

The motorway is open but heavy traffic is reported in the area.