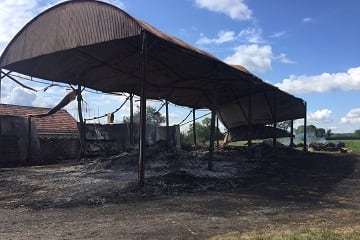 POLICE are appealing for witnesses following a large barn fire in Langport.

The fire happened at the barn in Long Street, High Ham between 7-7.15pm on 29 August. A Dutch barn, full of hay was completely destroyed. Damage is estimated to be around £50,000.

Two men were seen in the area at the time of the incident and the Police are keen to speak to them to see if they might have useful information to help their enquiries into the fire, which they are treating as suspicious.

Two vehicles were also spotted in the area. Police are keen to speak to the drivers.

The two men seen in the area are described as a white man, aged 16-20 years between 5’9” – 5’10” tall, of medium build and wearing a wearing a dark green hooded fleece top and a white man, the same age, who is thought to have been wearing sports clothing.

The two vehicles reported to have left the nearby playing field car park – just after the fire was started – were small vehicles (Ford Fiesta sized). One was bright metallic blue in colour and the other silver.

A spokesperson commented “We are keen to speak to the drivers of the vehicles and also the two men who were seen in the area at the time.”