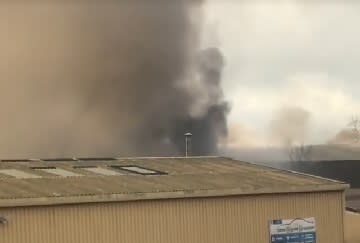 The Fire Service were mobilised to reports of flames coming from the roof of a commercial building at Tonedale Industrial Estate, Wellington at 8.15 this morning. (Weds Feb 20th)

Three local appliances and an aerial ladder platform were mobilised to the incident along with an officer.

A spokesperson commented; ” The Control Room received numerous calls reporting this incident. Once crews arrived on scene it was confirmed there was a large commercial unit on fire which also involved a heavy goods vehicle and gas cylinders. Crews got to work using two breathing apparatus, two main jets and two hose reel jets. Two gas cylinders on scene were being cooled. Crews also requested to make pumps 5 due to severity of the fire.”

At 11:17 crews confirmed the fire to be under control and out. The fire was extinguished using 6 breathing apparatus, 2 thermal imaging cameras, 3 main jets, 2 hose reels backed up with a water supply from nearby hydrant. There had been 20% damage to the building with 40% damage to contents, crews working to control the stem of an oil leak.