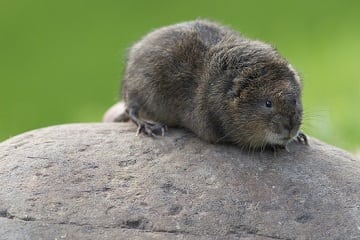 For the first time in 30 years one of Britain’s most endearing yet rare mammals, the water vole, could soon be spotted swimming along by the river banks of its former home on the National Trust’s Holnicote Estate on Exmoor.

Early in September, 150 water voles will be reintroduced at six carefully chosen sites on the estate.

This is the National Trust’s first reintroduction of water voles in the South West. The water vole is Britain’s fastest declining land mammal, over time disappearing from 94% of its former sites. But now these much loved creatures are being given a whole new start in a healthy environment, where they should breed and flourish.

The Trust believes that water voles can once more become an important and integral part of the whole ecology of Holnicote, contributing to the richness of the wildlife here and also giving future generations the chance to get to know these special wild residents – immortalised in Kenneth Graham’s classic ‘Wind in the Willows’.

The precious new arrivals will be closely monitored to see how they are settling in. Rangers, special ‘vole-unteers’, students and the public will be joining forces and using simple field signs to record their presence and behaviour – from actual sightings and ‘plopping’ sounds as they dive in, to droppings, vole runs and burrows, and grass blades nibbled off at distinctive 45 degree angles.

The streams and banks can be easily seen from many of the walks on the estate, and as water voles are active during the day they may well be encountered going about their business.

Alex Raeder, the National Trust’s South West Conservation Manager, said: ‘I remember being enchanted by these creatures as a child, and hugely welcome their return. They were once a vital part of the Holnicote ecosystem, and could be again. This ambitious project not only brings back to its rightful home a much-loved small animal, which sadly became locally extinct due to human activity, but also adds to the whole wealth of wildlife and enjoyment of this wild and stunning estate.

‘In true ‘Wind in the Willows’ style, these voles should soon be busy burrowing into the muddy banks and creating more natural-looking edges to streams with shady pools that are great for so many other small creatures. I very much look forward to making their acquaintance once more.’

These water voles, which have been specially bred from British animals by expert ecologists at Derek Gow Consultancy, will be released in sibling groups and breeding pairs. The plan is to release another 150 water voles next spring.

Water voles became endangered for two main reasons – the degradation, fragmentation and loss of habitat due to farming intensification and urbanisation after the Second World War, and because of North American mink – predators of the vole – escaping, or deliberately bring released, from fur farms (especially in the 1970s and 80s).

Mink are not native UK animals and can be voracious predators of voles. In preparation for the vole reintroduction, on-going investigations on the Holnicote Estate have to date found no evidence of the American mink that might threaten their return.

The water vole reintroduction is part of the National Trust’s ambitious new Riverlands project where it has committed £10 million to restoring and reviving five rivers across England and Wales – part of the Trust’s wider objective to restore 25,000 hectares of wildlife-rich habitats by 2025.

Ben Eardley, National Trust project manager for Porlock Vale Streams, said: ‘This project will create new and enhanced wetland and woodland, a greater abundance of wildlife such as the water voles, and a reduction in flood risk for the community and for visitors to Exmoor.

‘We’ll work closely with local people and together understand the importance of these rivers to all of us, while providing long-term care for the complete catchment.’