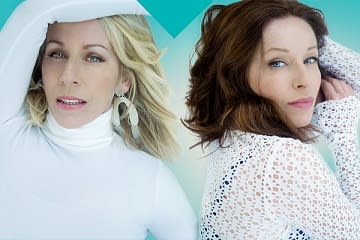 Live in Somerset, a three-evening popular outdoor music event, is returning to Taunton’s Vivary Park next summer, and the first of the three concerts has been announced.

Eighties pop sensation Bananarama will be the headliner at Live in Somerset on Saturday 13th July 2019. The duo, made up of Sara Dallin and Keren Woodward, is the most successful female band worldwide, with the most charting singles, including Venus and Love in the First Degree.

Bananarama will be joined on the Saturday night by a number of special guests, all of whom had chart success in the 1980s and 1990s. Heartthrob Jason Donovan; Hazell Dean who scored a succession of massive club and dance hits; the glam rock band, Doctor and the Medics, which topped the charts with Spirit in the Sky; and one of Britain’s best loved reggae bands, Aswad, join the line-up.

It will be an electric atmosphere in Vivary Park on Saturday 13th July 2019, with concert-goers dancing to some of the most iconic hits from the ‘80s and ‘90s, as the artists take to the stage.

Live in Somerset is a three-evening outdoor music event (12th, 13th, 14th July 2019) organised by LCC Live. The concert promoter has put on many successful performances in Taunton over the last few years, including Rod Stewart, Status Quo, Jools Holland, Billy Ocean, Paloma Faith, Will Young and Scouting for Girls. The team is back with another three evenings of sensational live music.

Live in Somerset featuring headline artist Bananarama with special guests, Jason Donovan, Hazell Dean, Doctor and the Medics and Aswad, is the first of the three evenings of live music to be announced. The gates will open at 4pm, and concert-goers can choose from standing or seated tickets.

Carlie Davidson of LCC Live, said: “We’re delighted to be headed back to Vivary Park to offer music fans in Somerset another three nights of incredible live music. Live in Somerset with Bananarama and their special guests will be an amazing night of ‘80s and ‘90s music. We expect there to be an incredible atmosphere in Vivary Park.”

Carlie added: “We’ve a further two artists to announce, which we will do in the coming weeks. They will perform on the Friday and Sunday nights, bringing around 20,000 music fans to the local area over the course of the weekend. It’s going to be another great weekend of live music – please come and join us!”

Tickets go on sale at 9am on Friday 7th December 2018 for Bananarama and special guests at Vivary Park. Standing and seated tickets can be purchased from Ticket Line or 0844 888 9991.

Tom Jones has announced that he is to headline a concert at Vivary Park, Taunton this summer as part of ‘Live in Somerset’.

The music icon, whose career spans over 50 years, will perform outdoors in Vivary Park on Sunday 14th July 2019.