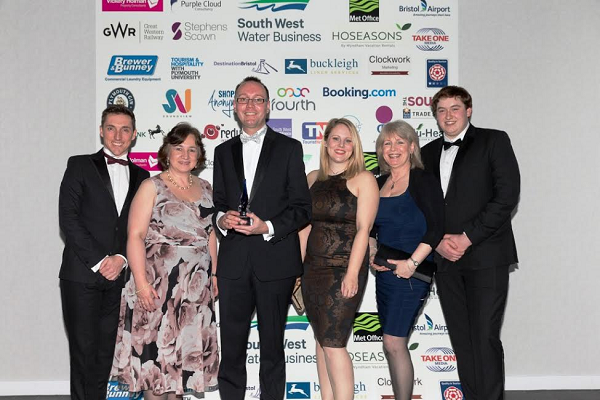 The team at the Taunton Deane Borough Council centre gained a Bronze in the Tourism Information Centre of the Year category at the annual South West Tourism Excellence Awards finale on Thursday night (Feb 2).

Held in the new Lansdown Suite of Ashton Gate Stadium in Bristol, this year’s awards were announced alongside performances from LED jugglers ‘Feeding the Fish’ and an introductory presentation from adventurer Alastair Humphreys.

With 469 people booked, it was the biggest ever regional gathering of South West tourism businesses, with 135 different awards presented following a rigorous judging process in which a record 605 entries were considered.

The Bronze is a significant achievement by the Taunton team who won Gold in the Bristol, Bath and Somerset Tourism awards last autumn.

Cllr Mark Edwards, Executive member for business development, said he could not be prouder of the team and its growing success.

“To win an award when you are competing against the very best in the South West – a tourism hotspot – is a tremendous achievement. Our team works incredibly hard day in, day out and always strives to improve.

“The Taunton Visitor Centre service is second to none and I hope everyone in Taunton Deane will join me in congratulating the team, led by Andrew Hopkins. Our staff are always prepared to go that extra mile.”

Taunton Visitor Centre has gone from strength to strength since moving to the Market House in the town centre where the premises are accessible to even more people.

It has increased the range of services available to visitors and local residents including travel and tickets sales, and advice on where to go, where to stay and what to see in the area.

The Visitor Centre team maintains the Visit Taunton website – www.visitsomerset.co.uk/taunton and Facebook, twitter and Instagram accounts which have all enjoyed a steady growth in numbers. It has also increased income from advertising in the town centre rotundas, the banner site at Castle Bow, and the new TV ‘promo’ screen in the Taunton Visitor Centre.

Andrew Hopkins added: “To win Bronze at such a prestigious event is fantastic and a real accolade for our team. It comes on top of the Gold and we are delighted that Taunton is being recognised as a centre of excellence in the South West. I can’t thank the team enough for their dedication and professionalism.”

Alison also chaired the judging panel and said: “Yet again the South West leads the way in tourism excellence. Whatever 2017 throws at this very special region of Britain, tonight’s award winners will excel at what they do best – offering all comers the best possible visitor experiences.”

All entrants in the South West underwent a rigorous short-listing process with 380 being visited by a team of 36 mystery shoppers. Entry was free, and all entrants received feedback on how they had done, giving them useful tips for future success.

Robin Barker of Services for Tourism added: “Excellence is elusive. It takes creativity, commitment, investment, and persistence to achieve. So well done to all of this year’s winners – you are at the cutting edge of this region’s top industry and are genuine business icons.”