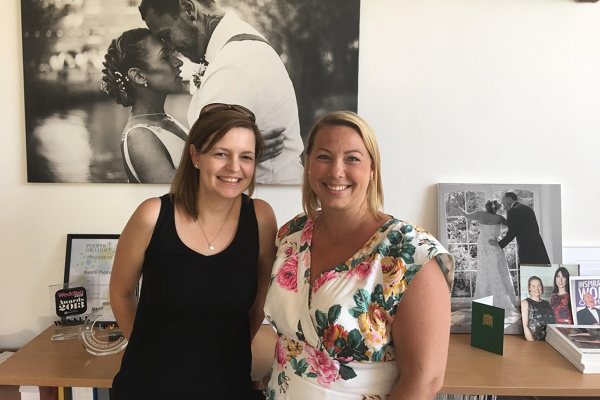 The Wedding Wishing Well Foundation is a Somerset-based charity formed in 2002, organising and funding weddings for people with a terminal illness across the UK, founded by Naomi Thomas who herself was diagnosed with breast cancer in 2009.

Naomi and her husband Graham, Head of the Board of Trustees, appeared on the ITV show Surprise Surprise in the summer of 2015 as the charity had grown at such a rate they were struggling with administration. However, they couldn’t justify a member of staff’s wages when that money could be used to fund a wedding.

It was on this popular family TV show that Naomi and Graham were introduced to Nick Mock, MD of One Step Recruitment based in Taunton. Nick gifted the charity with a member of staff funded by One Step to help manage their communications, adding “we are thrilled to support this local charity that brings such happiness to couples at their most vulnerable time. Having lost my wife to breast cancer, I admire Naomi for her dedication to the charity despite her own battle with cancer.”

Two years on and in the charity’s fifth year of operation, One Step Recruitment re-approached The Foundation in 2017 to evaluate their staffing needs after the charity moved premises. Following a lively Facebook campaign led by the charity, One Step has now placed another fully funded member of staff as an executive assistant to Naomi, providing valuable administrative support to the charity.

“We cannot thank One Step Recruitment enough for the support they have given us since 2015. We are very proud to be working with such a fantastic local business.  Our new recruit Louise has already proven to be a much needed addition to our team. One Step has worked very hard meeting candidates to find a member of staff who is a good fit with our charity family at The Wedding Wishing Well Foundation” said Naomi Thomas.

This is the fifth anniversary year for The Wedding Wishing Well Foundation, who have organised some unusual weddings in their time, including a full Harry Potter themed wedding in Portishead.

A number of applicants applied to work for the charity responding to the social media campaign, many of whom have since registered with One Step Recruitment and are now in the process of finding work with other local employers.