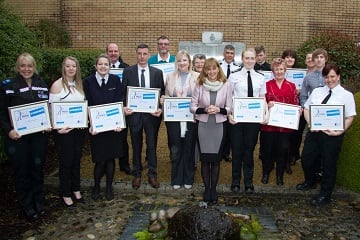 Brave and dedicated silent stars from across the communities of Avon and Somerset were recognised at the first ‘PCC Pride Awards’ of 2018 at a ceremony hosted by Police and Crime Commissioner (PCC) Sue Mountstevens on Tuesday, April 10th.

Among the 15 winners recognised with a PCC Pride Award was an extraordinary group of friends there for someone in their time of need, a Beat Manager commended for her response to tackling anti-social behaviour as well as many selfless volunteers.

The winners and their guests attended the ceremony at Police and Fire Headquarters in Portishead, before being invited to have lunch with the PCC and Chief Constable Andy Marsh, followed by a tour of the communications centre where ‘999’ calls are received.

PCC Sue Mountstevens said: “It is always humbling to see the dedication, bravery and hard work of the many people living amongst us. They are the unsung heroes who continually go that extra mile to keep the communities of Avon and Somerset safer and stronger.  It is always a joy to meet them and hear their stories.

“These awards are a celebration of those silent stars who often do not get the recognition they so richly deserve. I am proud to say that all of these winners have made a lasting impact on the lives of Avon and Somerset residents and I am grateful to every single one of them for their efforts.”

During the afternoon lunch we had the chance to catch up with some of the winners and heard what they thought about the day:

Dawn Leonard made national headlines, on International Women’s Day, after bravely putting her own life at risk to save others and preventing what could have been a terrible road accident.  Lorry-driver Dawn positioned herself between the central reservation and another lorry guiding it to the safety of the hard shoulder after the driver fell ill at the wheel.  Dawn said: “I had to do something to stop him hitting the central reservation or other cars, or else something awful was going to happen.  You never know how you’re going to react in these kinds of situations and I couldn’t sit without doing anything.”

Taunton Volunteer Police Cadet Lucy Fudge, who is described as ‘truly outstanding’ for her dedication to volunteering despite ill health said: “I was really pleased to be nominated for a Pride Award for helping the community and supporting my cadet unit and I enjoyed coming along for the ceremony.”

Emergency call handler Claire Bounds was nominated for her response to a call from a member of the public, who witnessed a motorcyclist fall from his bike on the motorway.  Claire’s nomination says her level-head and professionalism undoubtedly saved the man’s life.   Claire said: “I’m delighted to receive this award on behalf of the Communications Team, it’s very much a team effort and it’s great to receive the recognition.”

Harrison Hacker, Josh Swarbrick and their friends, who weren’t able to attend today’s ceremony, were visiting Bristol when they spotted a lady on the wrong side of the safety fence of the Clifton Suspension Bridge.  The friends worked with a local police officer and were able to bring the lady to safety.  They said: “We’ve never experienced anything like this before and it’s a memory that will stay with us forever.  We didn’t really think anything of our actions; we hope it’s what anyone would do in that situation.”

PC Amanda Patterson, Beat Manager for Avonmouth and Shirehampton, was nominated by her local residents for her dedication to tackling anti-social behaviour in the community.  Speaking about the nomination Amanda said: “I actually read the letter on April Fool’s Day and thought it wasn’t real.  When I realised it was I was shocked and felt very humbled.”

If you would like to nominate someone for a PCC Pride Awards visit  www.avonandsomerset-pcc.gov.uk/Take-Part/PCCs-Pride-Awards.aspx

People are encouraged to put names forward as nominations for the PCC’s Pride Awards.  The Awards are open all year round and decisions will be made quarterly.