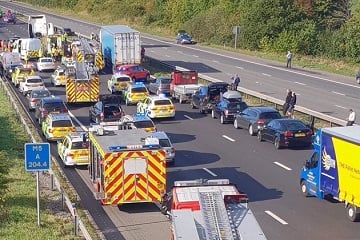 Northbound has re-opened just before 12pm.

A multi-agency operation is underway on the M5 in Somerset following a fatal collision.

Police were called just after 8.30am to a collision involving a HGV and several cars on the southbound carriageway near junction 25, Taunton.

Sadly two people were pronounced dead at the scene. Four other people have been taken to hospital, at least two of whom have serious injuries.

The road was closed in both directions between junction 24 southbound and junction 25 northbound, Taunton.

All the agencies are working as quickly as possible but the southbound carriageway is expected to remain closed for the foreseeable future while emergency services complete their work at the scene.

A spokesperson commented; “We’re deploying well-rehearsed plans to release motorists currently held in the road closure. It’s important for motorists to remain in their vehicles to avoid further unnecessary delay.”

We’re grateful to motorists for their patience and understanding. Read more information about why the road has to be closed for what can seem like a long time following a collision of this kind here https://bit.ly/2KFaVdH

Delays in the area are lengthy and Public transport is effected, The buses of Somerset say services in the Bridgwater and Taunton area are subject to delay and short notice cancellation.