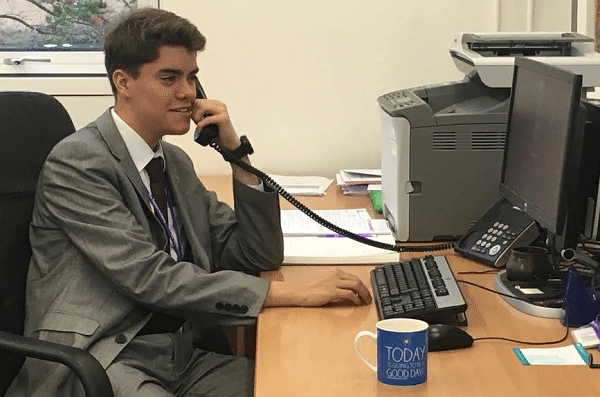 Fifteen year old twin brothers Declan and Jack Moss have been taking over as Head and Deputy Head at The Taunton Academy.

It was part of the Children’s Commissioner’s Take Over Challenge, where pupils take on a variety of roles in school and in their local community.

Declan, who plans to become an officer in the Navy, relished the chance to give out detentions while his brother Jack was more interested in what sort of cake was available in the staff room!

Other students took over the school canteen, taught lessons, became department heads and ran the theatre on the 8th of November. Locally they helped at the Conquest Equestrian Centre, Taunton Foodbank, Cheddon Fitzpaine School and Hestercombe Gardens for the day.

Declan said: ‘’I was really interesting, I certainly got to see how a school is run from a management perspective, it was quite insightful to see how it all works from the inside. The best bit was the staff briefing, I got a sense of how to lead adults as well as children.’’

The Head Teacher Jenny Veal said: ‘’Declan was an excellent Head Teacher, he really listened to the students as well as offering them his advice. Overall I was impressed at how the students took this exercise really seriously. It wasn’t just about having a bit of fun, it was also about creating a purposeful learning environment. It was amazing how attentive the students were to their peers while they were in charge.’’

Organiser and School Support Worker Jayne Parsley said: ‘’The students were all very excited, they worked very hard preparing their lesson plans, researching their topics and meeting the staff they took over.

At Hestercombe the students made the ‘Star Trail’ for the Christmas season, wrapped presents for the arrival of Father Christmas, and prepared for the Christmas Market by designing colouring sheets using the plants around the site.

‘’At Conquest the students learned about stable management and riding. All of the students will be volunteering there at weekends. For the students who went to the Food Bank it was freezing, but they were full of enthusiasm on their return about what they are short of and will need to help collect in the future.’’