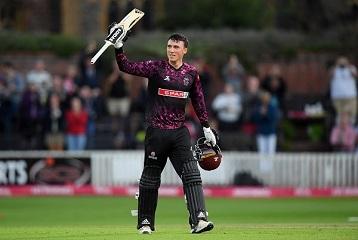 Somerset County Cricket Club are delighted to be able to announce that Tom Banton has signed a new two-year contract extension.

The 20-year-old’s current deal was due to expire at the end of next season, but he has penned a new contract which will see him commit himself to Somerset until at least the end of the 2022 campaign.

Tom made his Somerset debut in July 2017 in a T20 match against Middlesex at Uxbridge and went on to sign his first professional contract after graduating from the Somerset Academy at the end of that year. He went on to make his List A and First Class debuts the following year.

The wicketkeeper/batsman has made headlines throughout 2019 and his performances across all formats have made him one of the most talked about talents in the English game.

He has also accumulated over 520 runs in the Specsavers County Championship at an average of 35. In addition to his volume of runs, his glovework in white-ball cricket has also caught the eye.

After committing his future to Somerset, Tom said: “I always wanted to stay here. I love this place and I love the boys in the dressing room. I’ve been given freedom throughout this year and it’s always nice to be able to go out to bat without feeling any pressure. The support we get here is incredible. It doesn’t matter if it’s a four-day game or a T20, we always get good crowds.”

“What a year it’s been. It was great to win the Royal London One-Day Cup and hopefully we can continue our push for the Championship in the next two games.”

SCCC Director of Cricket, Andy Hurry said: “We are absolutely delighted to have secured Tom to the Club for an additional two years. He is an undoubted talent and his performances across all three formats this season have clearly made a positive impact on our cricket.”

“During his time on the Academy it was clear to see that he had an abundance of talent. To see the progress he has made through to the First XI has been extremely pleasing. It’s not just been about the volume of his runs, it’s also been the manner in which they have been accumulated. He has taken bowling attacks apart in white ball cricket and contributed some significant Championship runs in the middle order.”

“He is a very exciting talent and we look forward to supporting his development over the next few years and to his performances contributing to Somerset winning more silverware.”