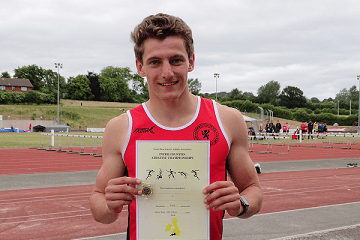 Taunton School athletes put in outstanding performances representing Somerset at the South-West Championships last weekend, with 18-year-old Matt Alvarez in a class of his own.

George Tester won the 400m, in a perfectly timed race, taking the lead in the final few metres and Cerys Lee jumped 5m 62 to win the long jump in her last attempt, in a National Standard distance. She also finished third in the shot.

In the distance events, Anna Parkinson, Charlotte Vickery and Alex Male ran gutsy races in the 800m, 1500m and 3000m respectively, with Alex securing a third place finish. Will Perry finished in the top 5 in the shot, with a year in hand in the age group. Eugene Milksiy qualified from the heats to make the 200m final.

Matt and Cerys have both been selected to represent Somerset at the English Schools’ Finals in July, a huge honour in itself, but both will also be team captains, for the Senior Boys and Girls.

Frank Tickner, Head of athletics, said: “Our athletes representing Somerset at the South West Champs put in an outstanding performance last Saturday, in the highest quality display from our students since I have been in post.”